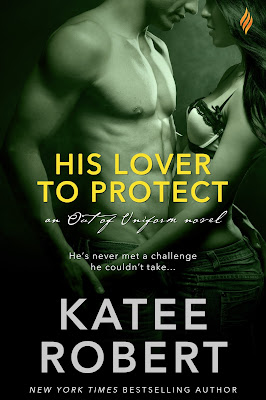 Alexis Yeung did everything right . . . only to watch everything go horribly, horribly wrong. Broken and angry, Alexis high-tails it to Europe, determined to face the world on her own terms and without consequence. Which includes a mind-blowing night with a sexy, scarred stranger.

Except, embittered former pararescuer Luke Jackson isn't exactly a stranger. He's supposed to keep an eye on Alexis without her knowing. Ending up in bed together was definitely not the plan. Now he's chasing her (admittedly hot) ass across Europe, a game of cat and mouse that always ends with the two of them tangled up in the sheets.

Something in their scarred, damaged souls calls to each other. And God help them, the sex in unbelievably hot. But if Alexis discovers who Luke really is, he'll lose the one thing that makes him feel whole . . .

Review:
We met Alexis in Falling for His Best Friend and I've been desperate to see her get a happily ever after ever since. She has been through so much having to face cancer and come to terms with no longer being able to have children of her own, throw in the treatment she received from her ex and the way her grandfather calls her a failure it's no wonder she has had enough. She is thrilled that Avery is happy but watching her sister's pregnancy is just too much for her and she decides to head off to Europe to get some space and take the time she needs to let herself get over her losses. My heart broke for Alexis when we first met her but she's made of strong stuff and I was proud to see her go out there and live her dreams. She's been knocked down by life but refuses to stay there and it was great to see her start to put herself back together as she visited the places she's always dreamed of seeing.

Luke is friends with Drew and Ryan and they've asked him to keep an eye on Alexis for them, they're worried that she took off with little preparation and don't want to see anything happen to her. Luke is recovering from his own injuries and the last thing he wants is to follow a spoiled princess around Europe just because she decided to take off and cause her family trouble. He has completely the wrong idea about her but when they eventually meet he is quick to realise his mistake. There is more to Alexis than meets the eye and he's desperate to uncover her secrets.

Alexis and Luke have great chemistry but they're both emotionally wounded and trying to put their lives back together in their own ways. While the story was undoubtedly hot, and Luke is a brilliant dirty talker (my favourite kind of hero!), I think what I enjoyed most was seeing them help each other rebuild their confidence and start to put their issues behind them. I have to admit that I was a little annoyed with Alexis's family for the way they viewed her as so helpless but luckily Luke doesn't take long to realise how wrong they are about her and he helps her see just how brave and capable she is.

The one issue I had was with how long Luke kept his identity secret, it was obvious that she was going to be hurt when she found out he'd been sent to protect her and I think I would have had more respect for him if he'd been honest with her sooner. However, things all worked out in the long run so I was able to forgive him quite easily. The romance between them was really sweet and it was great to see Alexis happy again, we also get a glimpse at some of the previous couples from the series and got to travel around Europe a little which made a nice change of setting. Katee Robert has definitely become one of my go to authors for contemporary romance and I'm looking forward to seeing what she comes up with next.