Review: This is One Moment - Mila Gray 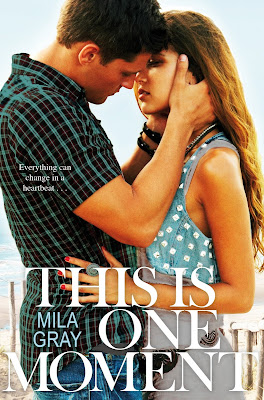 A forbidden romance.
A wounded Marine who thinks he's beyond saving.
A girl who's determined to prove him wrong.

Didi Monroe's waited her whole life for the type of romance you see in the movies, so when Hollywood heartthrob Zac Ridgemont sweeps her off her feet, Didi believes she might finally have met the one.

While Zac's away filming for the summer, Didi begins her internship at a military hospital in California. There, she meets wounded Marine Noel Walker. Frustrated on the outside and broken on the inside, Walker's a pain-in-the-ass patient who refuses all help.

Yet Didi can't help but be drawn to him, and though he's strictly out of bounds it soon becomes impossible to ignore the sparks flying between them.

As the attraction simmers into dangerous territory, Didi finds herself falling hard for a man she knows is going to break her heart. Because Walker doesn't believe in love or happy ever afters. So what possible future can there be?

Then tragedy hits, shattering both their worlds, and Didi is forced to choose between fighting for love or merely falling for the illusion of it.

From Mila Gray, author of the bestselling romance Come Back To Me, comes a devastatingly beautiful, compelling and sexy story about the meaning of love and the heartbreak of loss.

Review:
I'm a huge fan of Mila Gray / Sarah Alderson so I couldn't wait to read the sequel to Come Back to Me and had very high expectations for This is One Moment. We already met the heroine Didi in the previous book, she is Jessa's best friend, and after everything she's been through I was looking forward to seeing her get a happily ever after.

Didi is a romantic at heart, her parents have a fantastic marriage and Didi has always dreamed of having the same but her love life has always been disastrous. Things finally seem to be looking up though, she's finished her degree in psychology, she's dating movie star Zac, a guy most girls would kill to be with, and now she's about to start an internship at a military hospital while she studies for her masters. She has her whole life planned out and it doesn't include falling for one of her patients, especially not a frustrating and grumpy Marine like Noel Walker.

Only two members of Walker's team survived the roadside ambush that cost him his sight and although he was able to get Sanchez to safety he is full of guilt about those who were left behind. Suffering with PTSD makes Walker's life unbearable, he has no idea what to do with his life and no hope for the future because he is being crippled by the guilt he feels. The first meeting between Walker and Didi doesn't go well but she is determined to find a way to get through to him and the more time they spend together the more she starts to realise that her feelings are in no way platonic.

I really enjoyed the romance between these two, it's such a slow build up as they become friends and slowly start to open up to each other and it was nice that nothing felt rushed between them. They obviously have chemistry but it takes a long time before they act on it because Didi is worried about crossing lines and losing her internship but the wait just made things that much sweeter when they finally give into temptation. Didi is such a kind and caring person, she wants to do her best by Walker and the other guys she's working with but at the same time she's aware that she's risking getting her heart broken if Walker doesn't learn to open up and let her in. Walker's back story broke my heart, he had been through so much and he did his best to survive and help his team mates but he can't forget the ones he wasn't able to save. He wants Didi but doesn't feel worthy of her love so he tends to push her away thinking he's doing it for her own good and there were definitely times when I wanted to shake some sense into him.

I think one of the things I enjoyed most about this story was meeting the other wounded soldiers on the ward though, Mila Gray does a fantastic job of showing the challenges that these guys face after coming home with horrific injuries and how they all have different coping mechanisms. Sanchez lost an arm and a leg but he's just grateful to be alive, he's the life and soul of the party who is determined to live life to the fullest and his banter often had me laughing out loud. On the other hand Dodds who lost both of his legs and is really struggling to come to terms with what happened. He's deeply depressed and seeing how miserable he was just broke my heart.

Although This is One Moment is at it's heart a romance novel there is a lot more to it than that and some of the other story lines can be quite painful to read at times. This isn't all sweetness and light, there is a realness that will tug on your heartstrings and make you feel grateful to be alive. Mila Gray has given us a fantastic follow up to her first novel and I'm definitely excited to see what she comes up with next.