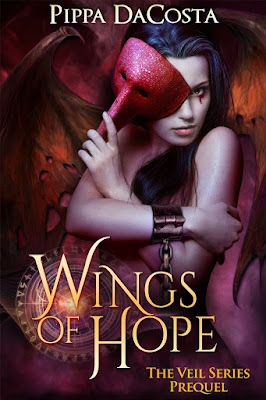 When Mammon, the Prince of Greed, 'acquires' a half-blood slave known as 'Muse' for three nights, and bespells her with tales of a world where people live like kings and queens among towers of steel and glass, the seed of hope takes root in Muse's soul. But hope, for a half-human half-demon creature like her, is a dangerous thing. Especially when that tentative hope springs from the honeyed words of a Prince of Hell. What is Mammon's price for freedom?

Meanwhile Da'mean, her ruthless owner, would rather see her dead, than free. She belongs to him. She is his muse. And no beast will take her from him.

The netherworld is harsh and violent. Muse's demon kin are merciless, blood-hungry beasts, but little do they know, Muse has something far more dangerous coiled inside her, desperate for a taste of freedom.

Review:
Wings of Hope is a short prequel to the Veil series and you can actually get a free copy by signing up for Pippa DaCosta's newsletter here. I've not read any of the other books in this series so can confirm that this definitely worked as an introduction to main character Muse and the world she lives in and it was more than enough to make me want to dive into the next book as soon as possible.

Muse is half-demon and half-human and has been raised in hell where she is a basically a slave. Her master Da'mean treats her like a possession and he is determined to break her will so life definitely hasn't been easy for her. She is used to being treated as nothing and considered lesser by the full demons that surround her and she knows that death is in the cards for her. Especially when the Prince of Greed Mannon takes a sudden interest. Da'mean does not like to share his toys but he's unable to refuse a prince and Muse knows she will be the one to suffer his wrath.

Although Wings of Hope is a relatively short story Pippa DaCosta does a fantastic job of introducing this world, she paints a vivid, if dark, picture of what life has been like for Muse and it isn't always easy reading. Muse herself is a fascinating character and I can't wait to get to know her better. She has always tried to keep her human side hidden because she considers it her weakness but Mannon makes her begin to hope for things that she never even thought of before. She longs for freedom but that isn't something that is going to come easily for her.

I don't really want to say much more in this review but I definitely think this is going to be an interesting series and I'm looking forward to finding out what happens to Muse next.

Source: Received a free copy for signing up for the Pippa DaCosta's newsletter