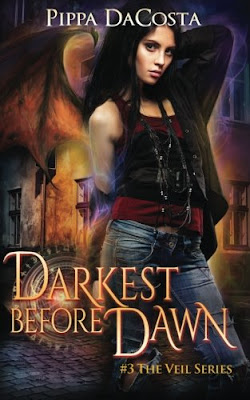 “It’s too late to save myself, but I’ll save her, even if it kills me.”

When Akil leaves a nine year old half-blood girl on Muse’s doorstep, it’s not long before the demons come hunting, but this time Muse isn’t the target. The Institute, Muse’s immortal brother, and the Princes of Hell, all want a piece of the little half-blood. What’s so special about Dawn, and why has Akil conveniently disappeared just as Muse needs answers?

To save the half-blood girl, Muse must first save herself, but is it already too late? Muse’s humanity is failing. Her demon hungers. The darkness coiled around her heart lures her toward madness. And all that stands between Muse and her demon’s lust for destruction, is the hope that some half-bloods do get happy endings.

The veil weakens. Titles will fall. A new prince rises. And if Muse can’t stop them, the demons will have their day.

Review:
I was already a huge fan of this series but it honestly gets better and better with every instalment! I was on the edge of my seat for pretty much the entire book, never quite sure who to trust, never quite sure what would happen next and regularly shocked by the turn of events. Darkest Before Dawn is a gritty read, I think it's actually the darkest book in the series so far and it isn't always the most comfortable story to read but it's totally gripping and hooked me in from the very first page.

Muse is such a fantastic character, she has suffered more than anyone should have to endure and we're definitely seeing the effect things have had on her here. Her human side is losing the battle and the demon is starting to take over but she still has a deep sense of honour and integrity. She is faced with challenge after challenge but she always does what she thinks is best and regularly puts herself in danger to protect others. I have to admire her for the way she cares about others, even people she doesn't know very well.

In this instalment Akil rescues a young half-demon child and tasks Muse with protecting her. Muse knows exactly what it is like to be so powerless and in the hands of the demons so Dawn's story resonates with her deeply and she will do anything to save the child from a fate worse than death. I have to admit Dawn just about broke my heart, she's only nine years old but she's literally been to hell and back. Dawn's half-blood powers are incredibly rare and particularly terrifying but she still has a childlike innocence to her and she definitely brings out Muse's protective instincts. The scenes between the two of them were really touching and incredibly bitter sweet, especially when you think about the reasons why they bonded so quickly.

All the characters we love (or love to hate!) are back in full force. Akil gets harder and harder to read the more we see of him, sometimes I actually find myself liking him but I still wouldn't trust him as far as I could throw him. Stefan has been going through some interesting changes of his own and I have to say I'm loving his storyline. I enjoyed getting to see more of his demon side here and I'm still rooting for him and Muse to find happiness together in the future. Adam and the institute are still doing terrible things supposedly for the "greater good". Akil may be a demon but Adam proves once more that humans can be just as bad, if not worse. I was disappointed in Ryder for remaining so loyal to the institute when he knows what goes on in the background and I really hope we get to see him come to his senses in the future.

Darkest Before Dawn was my favourite book in the series so far and this series is definitely proving that Pippa DaCosta is an author to watch out for. I'm relieved that the entire series has already been published so that I can dive right in and continue my series binge.