I'm so ridiculously excited that there is going to be a new Weather Warden book! I absolutely love this series (I guess this gives me the perfect excuse for a reread!!).

Rachel is self publishing this story but she has a kickstarter campaign running until the 23rd of October to raise money to have this novel professionally edited & to pay for cover designs and other upfront expenses. The goal has already been met (so the book will definitely be published WOOHOO!!) and it's also met it's original stretch goals which means ALL backers will receive a free copy of the professionally recorded audio book, 5 extra Weather Warden short stories and an exclusive novella about David that will only ever be given to people who back the kickstarter! Since the campaign was so successful Rachel has said that she'll be adding more stretch goals in the next day or so so you could end up even more rewards.

You only have to donate $5 to get the ebook version which is a fantastic price for a full length novel, especially when you take into account all those extras that will be thrown in!

I just thought I'd post the details on here in case there are any other Weather Warden fans out there who haven't seen the kickstarter campaign. $5 is an amazing price for an ebook, audiobook, 5 short stories and a novella. I doubt the finished product will be that cheap if you miss the kickstarter! If you're willing to donate more there are other options available for a signed paperback and a limited edition, signed hardback so there are options for all budgets.

Here is the blurb Rachel has posted on the kickstarter page FYI:

RED HOT RAIN starts a few years after the end of TOTAL ECLIPSE, in a world that seems to finally be settled. Mother Earth isn't mad at us. The Djinn have kissed and made up (sometimes literally) with the Wardens, and the two sides work together to solve whatever problems do arise. All good, right?

When Joanne Baldwin first hears about a freak monster storm that destroys the rebuilding community of Lubbock, Texas, she takes a personal trip to find out what's going on. Problem is, seems like it's exactly as it appears: a freak natural occurrence.

But when the same kind of storm tears a killer swath across the country to follow her home, and all her Warden powers can't put a dent in it, it's clear there's more to this storm front than physics. Soon, Joanne's embroiled in a deadly struggle against a mysterious, powerful opponent, and her husband David--most powerful of the Djinn--seems strangely unhelpful against whatever's coming for her. Even Lewis, her long-time friend and ally, now an otherworldly consort to Mother Earth herself, doesn't seem inclined (or able) to help. Someone's got the mother of all grudges against Joanne Baldwin, and they're coming at her hard.

And not just her. Joanne's not just fighting for her own life. It's coming for her son, too.

It'll be up to Joanne to save herself and her son from the storm that's coming for them ... a storm that wants to erase Joanne Baldwin and everyone she loves from the face of the earth. 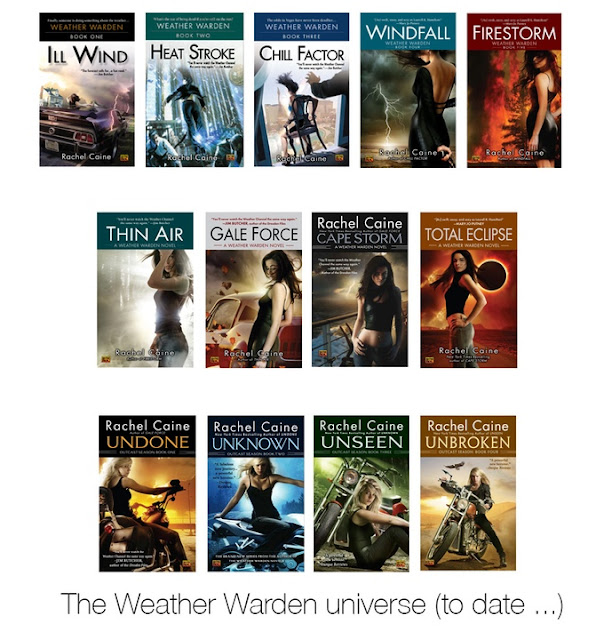 So if you're a fan of the Weather Warden series and are as excited about Red Hot Rain as I am make sure you check out the kickstarter campaign! You only have until the 23rd of October if you want to take part :o)
at 19:22