Review: Beyond the Veil - Pippa DaCosta 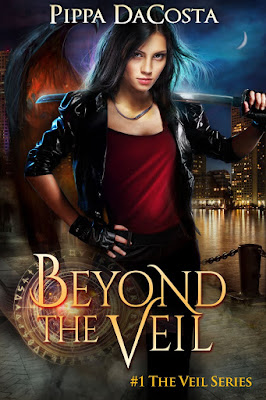 “They say I’m half demon, but I like to think of myself as half human, especially as the demons want me dead.”

Charlie Henderson is living a lie. Her real name is Muse and her attempt at a normal life is about to go up in smoke.

When a half-demon assassin walks into her life, leaving a trail of destruction in his wake, Muse must return to the one man she hoped never to see again and ask for help. The Prince of Greed isn’t known for his charity. The price is high, and the cost could tear her apart.

Trapped between the malevolent intentions of a Prince of Hell and an assassin with ulterior motives, Muse must embrace the lure of chaos at her core; the demon inside her, in order to survive.

When your ex is the Prince of Greed, you'd better be ready to raise hell.

Review:
After loving the prequel, Wings of Hope, I couldn't wait to see what would happen to Muse now that she had escaped from hell and her demon owner. Beyond the Veil picks up the story about five years later, Muse is now living in the human realm and working as a blacksmith using the fake name Charlie. She has completely suppressed her demon half and does her best to just blend in with the human population and live her life completely under the radar. Things change when an assassin turns up at her workshop and calls her by her demon name. With her cover literally blowing up around her Muse has no other choice but to turn to Mannon, the demon who helped her escape captivity, for assistance once more. Mannon is also living in the human realm and under the assumed name of Akil he is a rich and powerful businessman. He promises Muse protection but when you're dealing with the Prince of Greed you have to be very careful about the price you might have to pay.

Beyond the Veil was one of those stories that completely sucked me in from the beginning. The Muse we meet at the beginning of this book is very different to the one we saw in the prequel. Her demon half saved her in the past but now she is determined to keep that side of herself hidden and live as a normal human. All she wants is to stay off the radar of the demons who want to see her dead. She was grateful to Mannon for the help he gave her but even though they have great chemistry she doesn't want to be tied to him forever and would rather stand on her own two feet. Muse may be trying to live a quiet life but when she's backed into a corner she is more than capable of standing up for herself.

I really don't want to say too much about the plot because it would be far to easy to give spoilers but what I will say is that nothing is ever quite what it seems. Everyone is keeping secrets and with characters who go from bad to good and right back to bad again at the drop of a hat, it really is impossible to tell who is on Muse's side and who has their own agenda. I absolutely loved the way the story took so many twists and turns and I could never guess what would happen next. I honestly don't know what to make of Mannon, one minute you think he really cares for Muse and the next you'll be convinced that he's the root of all evil but I guess you never can completely trust a demon. Alongside Mannon we have another hottie Stefan to deal with, he's another complex character with completely different motives and it's very hard to tell which of the two Muse might end up with. I have to admit I'm usually incredibly anti any kind of hint at a love triangle but things are so well done here that I actually found myself really enjoying the pull they both have on Muse.

Beyond the Veil is an action packed story that is full of shocking twists and it'll really keep you on your toes while you read it. The way things ended left me desperate to read the next book and I'm incredibly glad that the whole series is already published because I can feel a binge read coming on!