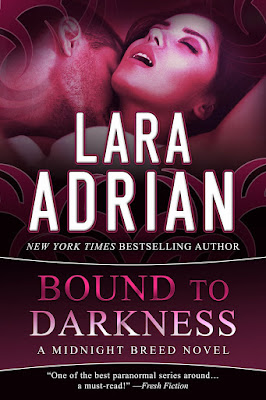 Carys Chase is accustomed to making her own rules and letting her heart lead the way--no matter what anyone else has to say about it. A rare Breed female and a daywalker as well, headstrong, beautiful Carys is one of the most powerful of her kind. She lives passionately and loves without limits, especially when it comes to the lethal cage-fighting Breed warrior called Rune.

Unbeatable in the ring, Rune exists in a brutal world of blood and bone and death. He's made his share of enemies both in and out of the arena, and his secrets run as deep and turbulent as his past. A dangerous loner who has survived by his fists and fangs, Rune has never allowed anyone to get too close to him . . . until Carys. But when the bodies buried in his past rise up to threaten his present, Rune must choose between betraying Carys's trust or putting her in the crosshairs of a battle neither of them can hope to win on their own.

Review:
I love the Midnight Breed series, I just can't help myself I'm totally addicted to these books. Things have changed a huge amount since the dramatic outing of the Breed in Darker After Midnight and I'm really enjoying getting to know the younger generation of the Order. It's really interesting to see how some of the previous couples are coping with parenthood, especially now that the older children are starting to find their mates and that was especially true here.

Carys is the daughter of Chase and Tavia she's a rare female vampire and a daywalker to boot thanks to her mother's genetics so she really does have the best of both worlds. We've already seen Carys and cage fighter Rune together over the last couple of books so their relationship is well established even if they haven't fully committed and made a blood bond. Poor Chase is struggling to see his daughter as a grown up and Rune is definitely not the sort of guy he feels is worthy of dating his precious girl. Carys's twin Aric is also dead set against the match and that's before he starts finding out about Rune's background and the secrets he has been keeping. Carys isn't one to back down though, she wants Rune and she's determined to keep him no matter what anyone else thinks. Rune is the one who is holding back on the blood bond, he knows that his past will catch up with him eventually and he doesn't want Carys to get caught in the crossfire.

I love these two together, they have fantastic chemistry and the sex is off the charts hot (I'd expect nothing less from a book in this series!) but they also have a much deeper connection and are obviously crazy about each other. We already knew they were head over heels before going in but it was nice to see a couple in an established relationship get their chance to shine. I loved the fact that Carys was so stubborn and refused to let Rune walk away from her and I was really pleased to see how kickass she was when she stood by her man when he needed it the most. She more than proves herself as a tough cookie and I'm looking forward to seeing much more of her working alongside the other warriors in the Order. Rune is a bit different to the other guys in the series, he's still all alpha male but he takes things less seriously and is more willing to fight for what he wants. He may worry about his past catching up with him but he is more than happy to have Carys on his side when he is facing a life or death battle and he didn't mind her taking an active role in protecting them both.

Alongside the romance we also get to find out more about both the Opus Nostrum and the Atlanteans and I can't wait to see what happens next with both groups. One things for sure things aren't going to slow down for the Order any time soon. We get to catch up with previous couples as well as see a bit more of Zael (please, please someone tell me he's getting a book of his own - I already have a feeling about who he'll be paired up with!). I was slightly disappointed we didn't see more of Aric, since he's Carys's twin I was expecting him to have quite a bit of page time, but hopefully he'll get his own story soon enough. Lara Adrian is definitely managing to keep things interesting, she's always adding to her world and she ties things together in surprising ways which always keeps me guessing. This series has been a favourite for a long time now and it looks set to stay that way for a long time to come.