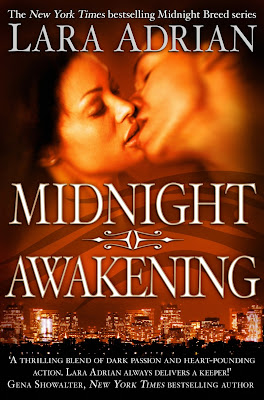 He has resisted temptation for centuries. A stone-cold warrior whose frozen heart refuses to thaw - until her....

With a dagger in her hand and vengeance on her mind, Darkhaven beauty Elise Chase prowls Boston's streets in search of retribution against the Rogue vampires who took from her everything she cherished.  Using an extraordinary psychic gift, she tracks her prey, well aware that the power she possesses is destroying her.  She must learn to harness this gift, and for that she can turn to only one man - the deadliest of the Breed warriors, Tegan.

No stranger to loss, Tegan knows Elise's pain.  He knows fury, but when he slays his enemies it is with ice in his veins.  He is perfect in his self-control, until Elise seeks his aid in her personal war.  An unholy alliance is forged - a bond that will link them by blood and vow - and plunge them into a tempest of danger, desire, and the darkest passions of the heart....

Review:
Before I get started with the review I'd just like to say that if you're new to the series then I'd highly recommend that you start with book 1 - Kiss of Midnight.  Although I try really hard not to give spoilers in my reviews it is very difficult when reviewing a series not to mention things that have happened in previous books so I wouldn't recommend reading any further if you've not read the first 2 books - you can check out my reviews for the previous books by clicking the links above (in the series list).

I have been looking forward to Tegan's story since I first started this series.  He is a Gen One warrior & helped Lucan found the Order.  He is the most deadly of all of the warriors and is the one that makes everyone nervous of him.  Tegan has been to the depths of hell - consumed with bloodlust when he lost his previous Breedmate 500 years ago & has burried his emotions to come back from the brink.  He makes you nervous but at the same time is incredibly attractive & is in desperate need of healing.

We were first introduced to Elise in Kiss of Crimson & to be honest I didn't think that much of her to start with.  She came across as quite weak & I didn't think that she was a deserving Breedmate for Tegan.  However, that all changed in this book.  Due to the loss of her son who was turned into a Rogue by the drug crimson she is now determined to do her bit to help in the war.  In this book she has left the safetly of the Darkhavens & is using her psychic ability to track down & kill Minions.  She wants to get vengance for Camden and is determined nothing is going to stop her.

Although the Order were able to remove the crimson dealer in the last book the war with the Rogues is continuing & Marek is still a threat to the Breed & humans alike.  The plot takes Tegan to Berlin where he is in need of assistance from Elise and much of this book is set in Germany.  We are introduced to new character Andreas Richen who has offered his assistance to the Order.  I think he is going to be an interesting character & I'm looking forward to finding out more about him in later books.

The story focuses mainly on the building relationship between Tegan & Elise.  They have both known love before & suffered badly due to the loss of their Breedmates which has made them wary of becoming vulnerable again.  Both of them are fighting against getting involved with each other but are drawn to each other against their wishes.  Elise needs Tegan's help in order to control her psychic abilities but he also finds that he needs her assistance too & that despite what he thinks she can be of help in the war.  The romance & passion between them is compelling and like the other books the plot is fast paced & keeps you hooked right to the end of the book.  I'm really looking forward to the next book!