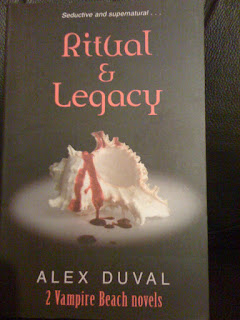 He'd seen her look this gorgeous once before, when she had first told him that she was a vampire.  She'd let him see her true beauty then and it was just as mesmerizing now.  Her black hair glimmered in the dim light, her skin was sheer golden perfection and, all of a sudden, Jason felt like the biggest idiot in the world.  Why had he ever let himself think that Sienna would want to be with him?  She was one of them.  He wasn't.  End of story.  Then she turned.  Her dark eyes met his across the sea of faces, and she smiled.  A sizzle raced through Jason's body and all his doubt disappeared.  It didn't matter what she was or what he wasn't.  They were made for each other.
Jason's life in Malibu is looking up, especially now Sienna, the most beautiful girl in town, seems to be interested in him.  Jason is learning to live with Sienna's dark secret - that she and her friends are vampires - but is she more trouble than she's worth?

Review:
This book incudes the third & fourth installments in the Vampire Beach series by Alex Duval, although it is still the same size as an average book.  The story continues to be told from 17 year old Jason's perspective which gives this series an interesting twist however I don't find that the characters are as well fleshed out as they could be.

I don't want to give too much away about the plot but Jason & Sienna finally manage to work out their issues & become a couple but the trouble doesn't end there.  They have a vampire hunter to deal with along with issues caused by Jason's Aunt & Sienna's parents.  I did find some of the plots interesting & Ritual wasn't bad but I found that Legacy didn't capture my attention.

If I didn't already own the last book in the series I wouldn't have gone out & brought it and to be honest it's only the fact that I'm stubborn and have to know how the series ends that will make me read on.  I'm hoping that the last 2 stories are an improvement.  I'm 30 & although I love YA fiction like The House Of Night Series by PC & Kristen Cast I do think that this series is a little young for me.