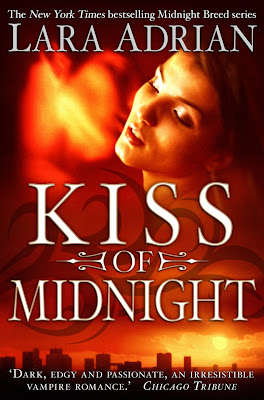 Insatiable desire.  Endless Seduction.  One touch is just the beginning.

He watches her from across the crowded dance club, a sensual black-haired stranger who stirs Gabrielle Maxwell's deepest fantasies.  But nothing about this night - or this man - is what it seems.  For when Gabrielle witnesses a murder outside the club, reality shifts into something dark and deadly.  In that shattering instant she is thrust into a realm she never knew existed - a realm where vampires stalk the shadows and a blood war is set to ignite.

Lucan Thorne despises the violence carried out by his lawless brethren.  A vampire himself, Lucan is a Breed warrior, sworn to protect his kind - and the unwitting humans existing alongside them - from the mounting threat of the Rogues.  Lucan cannot risk binding himself to a mortal woman, but when Gabrielle is targeted by his enemies, he has no choice but to bring her into the dark underworld he commands.

Here, in the arms of the Breed's formidable leader, Gabrielle will confront an extraordinary destiny of danger, seduction, and the darkest pleasures of all....

Review:
I first found & fell in love with this series last year when I was given the first 2 books.  Before I'd even finished the first book I had already ordered the rest of the series!  Since Amazon have now confirmed that the latest release - Shades Of Midnight - is now on it's way to me I thought now would be an ideal time to re-read & review the series ready for when it arrives.  It feels like I've been waiting forever for Shades to come out so I can't wait for it to get here.

Kiss of Midnight is the first book in Lara Adrian's Midnight Breed series so there is quite a bit of background information into the world she has created woven into the story.  The Breed vampires are decendents of an alien preditors who crash landed on Earth many centuries ago.  These aliens were unable to survive without drinking human blood & were responsible for wiping out whole civilisations.  Over time it was discovered that they could breed with human women but only those born with a special birthmark - women known as Breedmates.  Only male vampires are born & Breedmates are not turned into vampires but bonded Breedmates are able to live for centuries due to blood exchanges with their mates.

Lucan is Gen One Breed which means he was fathered by one of the aliens.  He is the founder of the warriors who protect both humans and the Breed from Rogues (vampires who have given in to bloodlust & are consumed with the desire for blood, sex and destruction).  All of the Breed are susceptible to Bloodlust but the older they are and the closer they are to their alien ancestors the more likely they are to succumb.  I really love Lucan as a character & the fact that he is having to fight his tendencies towards Bloodlust and is terrified of turning into what he most despises gives him a vulnerability that made me like him even more.  Gabrielle is also a very likeable character - until she witnesses a violent murder by Rogues she has lead a normal life & has no idea that the Breed exist let alone the fact that she is a Breedmate.

Apart from Lucan & Gabrielle there is a good cast of other characters - from Gabrielle's human friends who were very likeable to the other Breed Warriors who will be the main characters in future books in the series.  The book leaves you looking forward to coming back & finding out more about them.

There are a lot of comparisons between this series & JR Ward's Black Dagger Brotherhood but although there are similarities there are more than enough differences to allow you to enjoy both worlds.  I find Lara's books have stronger storylines & more romance than the BDB books.  I read the Midnight Breed books before I discovered the BDB & although I like both I prefer the Midnight Breed warriors & I definitely prefer the Breedmates from this series.