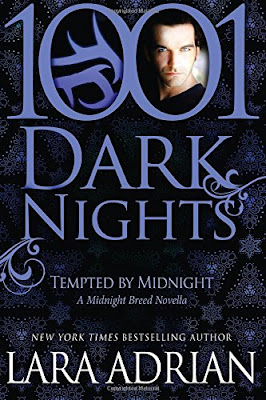 Once, they lived in secret alongside mankind. Now, emerged from the shadows, the Breed faces enemies on both sides—human and vampire alike. No one knows that better than Lazaro Archer, one of the eldest, most powerful of his kind. His beloved Breedmate and family massacred by a madman twenty years ago, Lazaro refuses to open his heart again.

Sworn to his duty as the leader of the Order’s command center in Italy, the last thing the hardened warrior wants is to be tasked with the rescue and safekeeping of an innocent woman in need of his protection. But when a covert mission takes a deadly wrong turn, Lazaro finds himself in the unlikely role of hero with a familiar, intriguing beauty he should not desire, but cannot resist.

Melena Walsh has never forgotten the dashing Breed male who saved her life as a child. But the chivalrous hero of her past is in hard contrast to the embittered, dangerous man on whom her safety now depends. And with an unwanted—yet undeniable—desire igniting between them, Melena fears that Lazaro’s protection may come at the price of her heart . . .

Review:
Ever since the slaughter of his entire Dark Haven Lazaro has been working alongside the Order to bring down their enemies and he's now the leader of their command centre in Italy. The Breed was exposed to humans 20 years ago and the dangers they face have only increased since then. Now there is a faction who is determined to pit humans and vampires against each other and Lazaro is working on creating a secret alliance between influential Breed members and powerful humans trying to prevent a war. When things go drastically wrong at a secret meeting he must work with Breedmate Melena if they are going to have any chance of surviving and warning the Order of the newest threat.

I've been waiting for Lazaro Archer to get his own HEA ever since his whole family (apart from his grandson) was murdered in one of the earlier books but I could understand why it has taken so long for him to reach a point where he was ready to move forward with his life. To be honest, Lazaro still doesn't feel ready, the last thing he wants is to find another mate. He blames himself for failing to protect his family and he doesn't want to risk getting his heart broken all over again so he's very resistant to the attraction he feels towards Melena and is determined to walk away from her once they get to safety. Melena first met Lazaro when she was a child, he was visiting her family Darkhaven and saved her life when she was just seven years old. Ever since that moment she has never forgotten the man who rescued her but that was before Lazaro lost his family and the man she meets now is very different to the one she remembers. That doesn't lessen the attraction she feels though and she becomes determined to prove to Lazaro that they could have a wonderful future together if he just lets her inside his barriers.

I have to admit that the fact that Melena has been crushing on Lazaro since she was a child was a tiny bit creepy. I'm very used to huge age differences in vampire / human romances and they don't usually bother me but there was something a bit weird about the way she kept thinking back to their initial meeting when she was a child and how she's always had a bit of a hero worship thing going on. I was able to get past that issue though and I enjoyed the romance that developed between them now. This is a novella so everything moves quite quickly between them but as much as I'd have loved a full length novel about them I think we got enough to make their story believable. We also get a nice amount of action and a bit more information about the Opus Nostrum that will have a knock on effect in the main series.