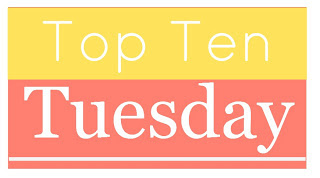 Top Ten Tuesday is a weekly feature hosted by The Broke and the Bookish. Each week has a different theme & you can find all the details about how to join in HERE.

Today's topic is a Halloween Freebie so I've decided to talk about my Top Ten Urban Fantasy Series. These are all adult series so most of them won't be suitable for younger readers but they're all fantastic and books I'm happy to shout from the rooftops recommending. It was actually REALLY hard to narrow this list down to just 10 series so I may have sneaked a few extra in there! All links below will take you to my reviews the different series mentioned.

1. My absolute favourite urban fantasy writers would have to be Ilona and Gordon Andrews, their most well known series is about Kate Daniels, a sword wielding, totally kick arse heroine who has a great deal of power and is half of one of my favourite fictional couples. I just have one word for you - Curran. I LOVE him and that's all you need to know! These books are full of action and danger, have a great supporting cast of characters and just never fail to make me smile. You can find my reviews of the Kate Daniel's series here but I'd highly recommend EVERYTHING by these authors including their Edge series and Innkeeper Chronicles and their most recent Hidden Legacy series which I'm desperately waiting for the next instalment of. Ilona and Gordon are undoubtedly the Queen and King of urban fantasy so if you've not read any of their books you're definitely missing out.

2. Nalini Singh is another author that I absolutely adore. I'm kind of cheating with this one because her Guild Hunter series definitely straddles the line between urban fantasy and paranormal romance but it's absolutely excellent so I had to include it. The series follows vampire hunter Elena as she hunts rogue vampires to keep humanity safe. This is a world where angels are in control, they're powerful and often terrifying creatures and they rule over humanity with an iron fist. The world is divided into territories, each controlled by an Archangel and Elena catches the attention of Raphael, the Archangel who runs New York. While many of the books in this series focus on Elena and Raphael and are definitely what I would consider urban fantasy (with a fairly high level of romance!) there are some books that feature other couples and are probably more paranormal romance. The world building is very strong in the whole series though and there is an incredibly likeable cast of secondary characters who all have major roles to play. If you enjoy Nalini's writing then it would be well worth checking out Nalini's Psy-Changeling series too, it's definitely PNR but also has very strong world building, wonderful characters and a lot of action. Nalini is an auto-buy author for me and I've yet to read a book by her that I didn't love.

3. I recently reread Rachel Vincent's Shifters series and I loved it just as much the second time around. The main character of this series is Faythe Sanders, a twenty something cat shifter and her family. The Shifters world is very male oriented and Faythe struggles to make some of the old fashioned council members take her seriously because she's a woman but she's stubborn, intelligent and stands up for what she believes in so she refuses to back down. This series can be quite dark in places and there were a few parts that absolutely broke my heart but I love it.

4. Another series I absolutely adore is Rachel Caine's Weather Warden and the spin off Outcast Season. It's been a long time since I read these books, in fact I read most of the series before I started blogging so it would have been about 6 or 7 years ago, but I love them. I was incredibly excited when Rachel Caine recently announced that she is going to revisit this world and I'm planning on rereading and reviewing the entire series before the new book releases next summer. These books are about humans who have the ability to control the weather and the Djinn they use to help them, the series is very different to anything else I've read and I'm looking forward to revisiting it.

5. You can't really talk about urban fantasy and not mention Patricia Briggs and her Mercy Thompson series (or the spin off Alpha & Omega books!). This is a series full of werewolves, vampires and fae and Mercy Thompson is the only known coyote shifter. She is less powerful than the other supernatural creatures around her but that never stops her for standing up for what she believes in no matter what it costs her. I love Mercy, she's one of the bravest characters you'll ever meet and I've been rooting for her from the beginning. The spin off series allows us to spend time with werewolf couple Anna and Charles and lets us explore more of the world that Patricia Briggs has created. There is always so much going on in these books and I just wish we didn't have to wait so long for new instalments!

6. So I've already included series with shifters, angels, vampires and even humans with magical abilities but the fantastic Katherine "Kitty" Katt series by Gini Koch is a little different because it's all about aliens. Kitty's whole life is turned upside down when she discovers not only that aliens exist but that they're living among us and hiding in plain sight. Not all of the aliens are benign though and when she manages to kill one of the monsters using just a pen from the bottom of her handbag Kitty is recruited to fight alongside the good aliens to protect humanity. This series is absolutely hilarious and never fails to make me laugh out loud, the characters are brilliant, the antics are madcap, the plotting is superb and I guarantee you'll never know what's coming next.

7. There is a reason that Karen Marie Moning's Fever series is such an incredibly popular one and it's a series that I'm going to be rereading over the next few weeks. Mac isn't your typical urban fantasy heroine, in fact at the very beginning I wasn't sure if I was going to like her much because she comes across as quite weak, but she goes through a baptism of fire and we really get to see what she's made of throughout the series. I ended up absolutely loving Mac but even if I hadn't these books would be worth reading just for Barrons. He's a totally mysterious, unapologetic alpha arse and I just can't resist his charms!

8. Another one of my favourite authors is Keri Arthur, she writes brilliant paranormal romances as well as urban fantasy but my favourite is her Riley Jenson series and the spin off Dark Angel books. Riley is a half werewolf- half vampire hybrid and alongside her twin brother Rhoan she works for the Directorate of Other Races, an organisation that is tasked with keeping humans safe from the huge variety of supernatural creatures that are wandering around. Life isn't easy for Riley, she is often forced into difficult situations because of her job but she always comes out fighting and I love her for that. This is a vast world and has a great range of characters and I loved meeting the next generation in the Dark Angels spin off, I keep hoping that Keri Arthur will revisit some of the other side characters in the future but I've not seen any indication that it will actually happen.

9. If you love vampires you should definitely check out Chloe Neill's Chicagoland Vampires series, Merit never asked to be a vampire but she was turned by Master Ethan when he found her badly injured after she had been attacked. He may have saved her life but he also turned it upside down at the same time and now she has to find a way to come to terms with what happened and rebuild a new life for herself with the vampires of Cadogan House. I love this series, Merit is brilliant and there are some great side characters, the series has plenty of humour but also plenty of danger, there's magic, sorcery, shapeshifters and interesting vampire politics, not to mention a brilliant romance.

10. I can't compile a list of my favourite urban fantasy series without including the Night Huntress series by Jeaniene Frost. I discovered this series back in 2010 when it was recommended to me by several UK bloggers and I've been hooked ever since. Cat Crawford is a half vampire who was born after her mother was attacked by a vampire. She has dedicated her life to killing every vampire she meets believing them all to be evil but then she meets Bones and he makes her realise that not all vampires are monsters. Cat is kick arse, Bones is hot and I absolutely love them as a couple. It's been a long time since I read these books but it's still a favourite series and I think I might be due a reread soon!

So those are my top urban fantasy series but I feel like there are a lot of other series that also deserve some love, these are mostly (but not all) newer series so haven't quite earned such a huge place in my heart (yet!) but they're definitely ones I'm excited to continue and worth giving a try!

So those are my favourite urban fantasy series! Do any of them make your top ten? Have I missed any series that you love? Urban fantasy is definitely one of my favourite genres so I'd love some new recommendations :o)
at 18:00