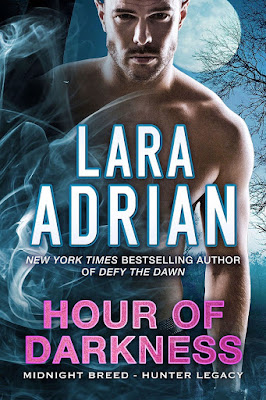 Born and raised as an assassin in the notorious Hunter program, Breed vampire Cain has since put his specialized skills to use as a mercenary willing to clean up any problem for a price. Or so he thought. After a job in Las Vegas strains even his dubious code of honor, Cain pulls up stakes and lands in Miami for a much-needed break. All he wants is time away to clear his head and regroup, but then a beautiful young woman is nearly killed in front of his eyes and the ruthless former Hunter becomes the only thing standing between her and a sniper’s bullet.

Marina Moretskova is no stranger to dangerous men. As the niece of a Russian organized crime boss, she’s grown up around killers and criminals. But her uncle wants out now, and he’s enlisted Marina’s help in buying his freedom by delivering valuable intel to a secret contact in exchange for protection. Not even Marina’s bodyguards are aware of her mission, so when an attempt on her life is averted by a handsome, steely-eyed vampire, as grateful as she is for Cain’s intervention, the last thing she needs is the shrewd Breed male nosing around for answers. Cain’s cold, haunted gaze and merciless abilities attest to his brutal nature, yet the rough, solitary Hunter stirs a powerful longing in Marina—a darkly seductive hunger she can neither afford nor resist. With a target on her back and covert enemies closing in from all sides, trust is a risk that can prove deadly . . . and the safest shelter she may find is in the arms of the most lethal man she’ll ever know.

Review:
Hour of Darkness is the second book in Lara Adrian's Hunter Legacy series but these books have all specifically been written to work as standalone stories so you can read them in any order. If you did read Born of Darkness then you'll recognise Caine as the Breed Hunter who was working in the casino and who had made more than a few questionable choices before he came through and helped Asher and Naomi in the end. He's the only character we've met previously though and through him we get to meet a whole new group of Gen One Breed males who survived the Hunter program.

Caine has been living in Miami since leaving Las Vegas trying to decide what direction he wants his life to take now, he's not happy with the things he did for money recently and is trying to clear his head. He gets pulled into Marina's orbit when she is nearly assassinated right in front of him. Caine can't just sit back and watch her die but when he realises she's a Breedmate he knows he has to help her find safety.

Marina's uncle is part of the Russian mafia but she has finally convinced him to change his ways and leave the criminal underworld behind him. She has travelled to America to bring valuable information to his contact and help buy their freedom. Unfortunately for her someone seems determined to stop her mission, and they don't care if murdering her is the only way to do it. Caine is the only person she can trust to help keep her safe but she's determined to do what she came to do and meet with her uncle's contact.

I'm really enjoying the Hunter Legacy series, so far it's been great getting to meet some of the Hunters who were raised in a lab by a madman and I loved meeting Caine and the brothers who he is closest to. There is a small group of them who created a home and a family and although Caine has kept himself apart from them for the last few years they welcomed him back with open arms and made space for Marina in their little family. It kind of reminded me of the very early days of the Midnight Breed series when most of the members of the Order hadn't paired off yet and I'm really hoping that all of these characters are going to get books soon! The romance was just what I look for in a Lara Adrian book, Caine was tough as nails on the outside with a warm gooey centre, Marina was strong, confident and knew exactly what she wanted, they had brilliant chemistry from the beginning but their romance took time to develop and there was plenty of action too. I can't wait for the next book in the series!