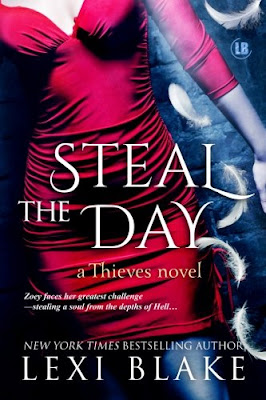 When a member of her crew is dragged to Hell by a demon, Zoey plans the most dangerous heist of her career. With her team at her side, Zoey intends to sneak onto the Hell plane and steal Sarah back.

The job seems impossible until a new client makes them an offer too good to refuse. If she can find an ancient artifact called The Revelation, she can use it to locate an angel who holds Sarah’s redemption in his hands.

Surrounded by warring angels and demons, the greatest threat may come from one of her own. Torn between her Fae lover and the vampire who has always held her heart, Zoey finds that she and Dev are trapped in Daniel’s web of secrets, and it may be Zoey who has to pay the ultimate price.

Review:
I left it a bit too long between reading this book and writing this to give you a full review but I do know I devoured this book and that I'm looking forward to continuing the series.

This book picks up Zoey's story not long after the end of Steal the Light. Her relationship with Daniel is more complicated than ever before now that she knows exactly how many secrets he has been keeping from her, things with Dev would be going well apart from the small fact that she still loves Daniel and now her heart is torn between two men, and if that wasn't enough she has to try and figure out a way to rescue a member of her crew from hell. Yes, complicated is definitely the right word for Zoey's life right now.

Alongside plenty of action and a lot more world building when it comes to vampire politics this story gives a lot of focus to Zoey's love life and the complex relationship she has with both of the men she loves. Daniel has finally declared his feelings and decided to fight for their relationship but she's hurt by the years he's spent ignoring her and the secrets he's been keeping. At any other point she would have run into his open arms and not looked back but that was before she met Dev and let him into her heart too. For the first time Daniel is facing the fact that he might be too late to rescue their relationship while at the same time Dev wants nothing more than to claim Zoey as his own but knows she'll never be completely happy without Daniel in her life.

I'm really enjoying the way Lexi Blake is developing their relationship and definitely have high hopes that my triad wishes are going to be fulfilled as the series continues.