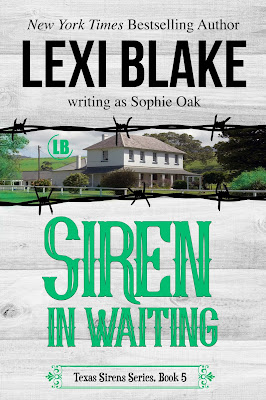 Bethany “Mouse” Hobbes spent her entire life waiting, especially for the love of Bo O’Malley. But for the first time in her life, she is ready to start living, with or without him. She has found her dream, restoring a rustic farmhouse on the outskirts of town.

Trev McNamara left Deer Run a high school hero and has returned, his football career in ruins. When Trev meets Mouse, he discovers a passion strong enough to overcome his past. But can she accept his need for control?

Bo O’Malley has lived his whole life in the shadow of his brother, never committing to anything or anyone. When the woman he secretly loved all his life begins an affair with the man who betrayed his trust, Bo will do anything to claim her as his own.

Transformed by their love, will Mouse be enough woman for both of them?

Bethany (known as Mouse) has been in love with her best friend Bo for as long as she can remember but she's tired of waiting for him to notice her and is finally ready to move on with her life. Bo will always be important to her but it's time to put herself first for once and she's planning to do that by buying the house of her dreams and restoring it to its former glory. Trev was a professional football player but the pressure was too much for him and left him spiralling into drug and alcohol addiction. Now he's been clean and sober for nearly 2 years and he's returned home to make amends to his sister while working on a local ranch. Bo has spent his whole life being left behind by the people he cares about, by the brother he adored and then by Trev, the friend who he looked up to. Beth has been his only constant but he's scared to act on his feelings for her in case he ends up losing her too. But when Trev returns and makes a move on Beth Bo realises that if he doesn't take action soon he could lose his chance forever.

I have to admit I wasn't sure I'd like Trev, I'm very wary of addicts and was worried about the kind of man he'd be but he was actually a total sweetheart and I loved him from the beginning. Yes he has his demons but he's worked hard to overcome them and what I liked most was the fact that he knows his battle is an ongoing one, he hasn't been magically cured but he is determined to fight his addictions every day for the rest of his life. I loved the way he treated Beth from the very beginning, she was such a sweet girl but due to her shyness and not wanting to cause trouble she tended to let people walk all over her. Trev stood up from her from the moment they first met but he didn't just protect her and keep her in a bubble, instead he helped to build her confidence so that she realised what an amazing woman she was and learnt to stand up for herself.

It actually ended up being Bo that I struggled with at first, he could be quite dismissive towards Beth and although I don't think he meant to hurt her he was definitely upsetting her regularly with his behaviour. It took a while for me to warm up to him but you soon start to realise that he's actually a nice guy but one who is so focused on worrying about what people will think of him that he makes stupid mistakes. Once he started to understand how his actions affected Beth and admitted to himself how much she really meant to him he worked hard to make amends and prove his feelings to her. Bo and Trev had been good friends before but Trev's actions when he was in his downwards spiral had put a huge wedge between them and it took time for Trev to earn back Bo's trust. There wasn't any romance between the two of them, they were more like brothers, but they both understood how much they each meant to Beth and were willing to share their lives to make her happy. Their bond was more than normal friendship though and they both got the extra support they needed from having each other in their lives, Trev had backup and an extra crutch to lean on when he was worrying about his addictions while Bo found a friend who would always be there for them and they worked really well as a triad because of that.

These books are full of sweet romance, scorching hot sex and come with just a little action and danger to add an extra edge to them. The whole series has been brilliant so far and I'm already looking forward to the next book!