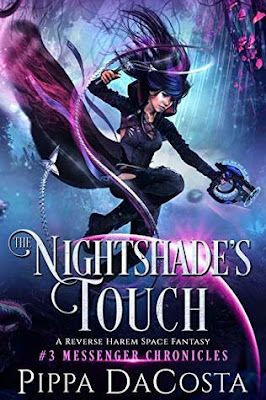 The unseelie—banished by Oberon long ago—are stirring awake, and there's one name on their poisoned lips: Nightshade.

Kesh is beginning to settle into her role as Halow's messenger, saving people from the fae with the help of Kellee, Talen, Arran and Sota, but if she has any hope of making her wrongs right, she must trust those around her. Without them, there is no Messenger. Friends, lovers, more. But one has a secret. A secret so dark it threatens to change everything Kesh believes in. A secret that could change the fate of Faerie, Halow, and all of humanity.

When the fae abandoned the stars long-ago, they left behind more than fairytales.

They left behind their monsters.

Review:
The Nightshade's Touch picks up Kesh's story not long after the ending of Game of Lies, Kesh is still trying to settle into her role as messenger and the hope of humanity that is resting on her shoulders. She's still torn between her loyalty to Oberon and her growing feelings for Kellee, Talen and Arran (formerly known as Aeon). Kesh knows what they want from her and she wants to live up to their expectations but she spent her entire life following orders from Oberon and she's still struggling with the way Eledan messed with her head. I'm not really going to tell you any more about the plot of this story so you're just going to have to read the book yourself if you want to find out.

What I will say is that this book is just as good, if not even better, than the previous two. It has all the action that you'd expect but it also takes a bit more time to explain the world Kesh is living in, we learn more about Oberon and the seelie court as well as the unseelie creatures he has worked so hard to destroy. Most excitingly we finally start to dive into some of the many, many secrets that Kellee and Talen have been holding back all this time. We're finally starting to see some emotional pay off in terms of Kesh's developing harem too, this series has been really slow build on the romance side but with the amount of secrets and lies between all our main characters that is totally understandable and has made the slowly developing feelings so much more realistic. Now that Kesh is starting to be honest, not only with herself but also with her men, they are starting to build the trust that has been lacking between them previously and she is definitely rewarded for their efforts.

This wouldn't be a Pippa DaCosta book without some shock revelations and a huge twist at the end but I loved absolutely every minute of it and this left me desperate to get my hands on Prince of Dreams! This series really is getting better and better and I'm very excited to see how things will turn out after that shocking ending.