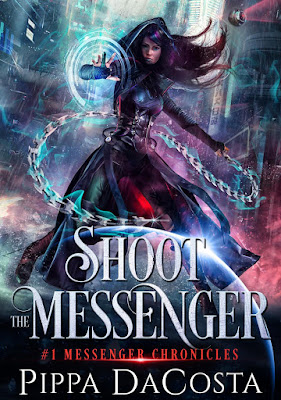 "Lies aren't her only weapons against the fae..."

In the Halow system, one of Earth’s three sister star systems, tek and magic—humans and the fae—are at war.

Kesh Lasota is a ghost in the machine. Invisible to tek, she’s hired by the criminal underworld to carry illegal messages through the Halow system. But when one of those messages kills its recipient, Kesh finds herself on the run with a bounty on her head and a quick-witted marshal on her tail.

Proving her innocence should be straightforward—until a warfae steals the evidence she needs. The fae haven’t been seen in Halow in over a thousand years. And this one—a brutally efficient killer able to wield tek—should not exist. But neither should Kesh.

As Kesh’s carefully crafted lie of a life crumbles around her, she knows remaining invisible is no longer an option. To hunt the fae, to stop him from destroying a thousand-year-long fragile peace, she must resurrect the horrors of her past.

Kesh Lasota was a ghost. Now she’s back, and there’s only one thing she knows for certain. Nobody shoots the messenger and gets away with it.

A new space fantasy reverse harem series where the guys are hot, the perils are many, and one rebel messenger holds the key to the survival of the human race.

REVERSE HAREM INFO: The Messenger Series is a slow burn reverse harem space-fantasy adventure. This series contains sexual encounters with multiple partners. The harem develops during the series. This series does NOT feature a love triangle.

Review:
I'm a huge fan of Pippa DaCosta, she's yet to write a book I didn't love and the way she's always coming up with new ideas and trying new genres keeps her books fresh and exciting. As soon as she mentioned a new series with the tag line "fae in space" I was sold but then she threw in reverse harem and that just sealed the deal. I honestly think that Shoot the Messenger is her best book yet and that's really saying something considering she's written so many of my favourite series (the Soul Eater, Veil and 1000 Revolution just for starters!).

This is a futuristic sci-fi with a fantasty twist set in a time when the fae have been hidden from the humans for over 1000 years since the last big war. As the humans created more and more tek to keep up with fae magic our world became harder for the fae to survive in and since the last battle they've retreated to their home-world. No-one is under any illusion that the war is over but so far the fae have kept their distance and the humans have started to feel safe. Kesh has a unique ability to hide from tek and she uses that to remain off the grid, she earns her money delivering messages for the underworld but her life is turned upside down when the recipient of one of her deliveries is killed and she is framed for the murder. She is determined to prove her innocence but her evidence has been stolen by a warfae, someone who shouldn't even be in the same star system, and she has a Marshal hot on her tail and ready to bring her in.

I really don't want to go into any more detail than that because this is one of those books where you just need to sit back and enjoy the ride. This is a book with layer upon layer of secrets, lies, betrayals and so much more. Every time you think you have something figured out Pippa DaCosta will sucker punch you with yet another twist that you didn't see coming. The story is told from Kesh's point of view but none of the characters you'll meet, including our narrator, are completely good or evil. They're all hiding deep dark secrets and I think we've only scratched the surface of what is there to uncover. Kesh is a badass character, she's a fighter who knows how to look after herself but at the same time she has a vulnerable streak and she's also not always the most trustworthy person to have around. Life has taught her to expect betrayal and that it's better to be the one holding the knife rather than the one getting stabbed in the back so she doesn't always make choices I'd agree with but I found myself understanding her actions all the same.

As far as the other characters go I'm intrigued by both Kellee and Talon but we don't know either of them well enough to have uncovered their secrets yet. Both guys have done things that make me question their motives but they're also pretty sexy in their own ways so I'm definitely looking forward to spending more time with all three of the main characters! I loved Kesh's AI buddy Sota too, he's not around for the whole book but he brought a lot of humour to the story so I'm hoping we'll see more of him as the series continues.

Shoot the Messenger is the start of an exciting new series and it's one I can't wait to continue. If you like stories with multifaceted, three dimensional characters and even more complex plots, books that will screw with your mind and leave your head spinning, then this one is definitely for you. Bravo, Pippa, bravo!