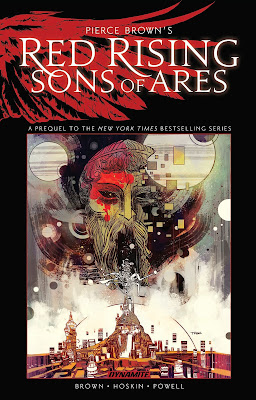 From the world of the best-selling YA series Red Rising comes a story of love and loss and rage!
In the future, when mankind has spread across the stars, the hierarchy of man is dictated by the color of one's caste. The Golds rule all, but what will happen when one falls for a lowly Red? See how a forbidden love will set the course of events for the future and lead to the formation of the formidable Sons of Ares!

Review:
Red Rising: Sons of Ares is a prequel to the Red Rising series that was originally released as 6 comics (which of course being a superfan I've already purchased!), I believe the comics are now out of print and only available as ebooks so I think it's fantastic for fans that we're now getting this hardback bind-up of the whole series. The hardback is available in two versions signed or unsigned which is slightly cheaper. I've preordered the signed copy and I can't wait to see it on my shelves.

Now you've got more of an idea what you're actually getting let's get to the interesting stuff like the artwork and the story. This is a prequel so it's set before Red Rising but I definitely wouldn't recommend starting here - you'll end up giving yourself spoilers for the main books if you do. I think fans of the series will love getting to see a younger Fitchner and learning how he met his wife (although this story is slightly different to how it's told in the books) and we also get to see baby Sevro which is pretty cool. It's very easy to see where Sevro gets his attitude from that's for sure! This also shows the reasons that the Sons of Ares was originally founded so it gives us a chance to see the very beginning of the revolution that changes everything for Darrow in Red Rising.

The artwork is wonderful, quite dark in colour but that fits the gory and violent tone of the story perfectly. I love the added touch that each conversation bubble is coloured to match the birth colour of the character speaking. I really enjoying being back in this world but via a more visual format and it left me wanting to reread the rest of the series again. This is one of my all time favourite series so I'll jump at any chance for more from this world and this was a lovely addition. 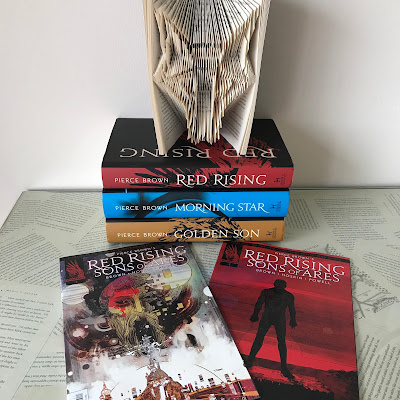 Bind up of all 6 issues Hardback (Signed / Unsigned) / Kindle: