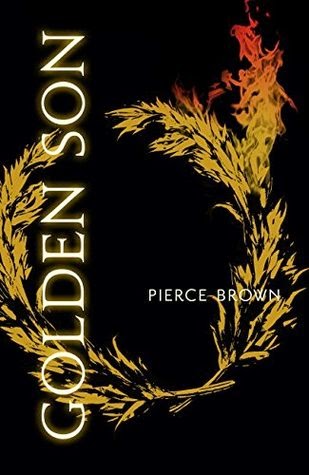 I'm still playing games.
This is just the deadliest yet.

Darrow is a rebel forged by tragedy. For years he and his fellow Reds worked the mines, toiling to make the surface of Mars inhabitable. They were, they believed, mankind's last hope. Until Darrow discovered that it was all a lie, and that the Reds were nothing more than unwitting slaves to an elitist ruling class, the Golds, who had been living on Mars in luxury for generations.

In Red Rising, Darrow infiltrated Gold society, to fight in secret for a better future for his people.

Now fully embedded amongst the Gold ruling class, Darrow continues his dangerous work to bring them down from within. It's a journey that will take him further than he's ever been before - but is Darrow truly willing to pay the price that rebellion demands?

Review:
I'm going to apologise in advance for this review because I just don't think I have the words to do Golden Son justice, I've been trying for days to write this and I can't seem to express myself in any sensible way so you'll just have to put up with my fan girl raving. Red Rising was without a doubt my favourite book of 2014, it was one of my first reads of the year and even though I read over 200 books after it none of them managed to knock it off the top spot. So as you can imagine my excitement levels for Golden Son were off the charts. I was a little nervous at the same time though, so many times you find the second book in a trilogy is a disappointing filler that doesn't really add to the story and I would have been gutted if that had happened here. I needn't have worried though because Golden Son is incredible, in fact I think it blows Red Rising out of the water which is quite an achievement!

To put it simply Golden Son is epic. It is a book that will grip you from the very first page. It will take you on a roller coaster of intense emotions - you will laugh, cry, cheer and scream in frustration. There are shocking plot twists, new friendships are built while old ones end in betrayal, your heart will be ripped out when characters you love are destroyed but you'll find yourself rooting for others to survive. The story is fast paced, the plot is intricate and has so many layers that I'm sure there are things I won't fully understand until I reread the book and the character development is fantastic. We get to experience epic battles but we also get to learn more about the society as we see Darrow working hard to bring it down from the inside. The world building is just incredible, it's already so detailed yet I feel like we've hardly begun to touch the surface and I can't wait to see where things go from here.

It's so hard to write a review when you don't want to give away any of the plot so I'm just going to talk about a couple of the main characters. Darrow has changed so much from the boy we first met, he has become quite cold in some ways and the only thing he really cares about is destroying the Golds who betrayed him and his people. He pushes his friends away and has become a bit of a loner but at the same time he manages to draw people to him, his allies would willingly walk into hell by his side and we see this happen time and time again. One of the things I've always loved about Darrow is that he isn't perfect, he makes so many mistakes but he is smart enough to recognise that and he tries hard to learn from them. There are times when it can be frustrating watching him push people away but it is easy to understand where he is coming from. I can't help but love him and I desperately want to see him find some kind of happiness even as he brings the system down around him.

Without a doubt my favourite character is Sevro though, he steals every single scene he appears in and I love him more than words can say. I've lost count of the number of times that Sevro and the Howlers have saved the day, the war would truly have been lost without them. I absolutely adore the friendship between Sevro and Darrow too. Sevro is often the voice of reason, the one who calls Darrow out when he isn't thinking clearly but at the same time Sevro can often be the more bloodthirsty of the two and he's brilliant at plotting against their enemies. Other highlights include meeting Pax's family, finally discovering who Ares is (I would never have guessed in a million years!) and meeting new character Ragnor who I hope we see a lot more of.

To be honest there are too many highlights to mention, Golden Son is so tightly plotted that there isn't a single wasted sentence. Every line is important, every single chapter is full of suspense, emotional anguish and shocking reveals. This is an exhausting read but in the best possible way and once again I feel confident in naming my book of the year even though it's only January. I think I'd be willing to sell my soul to the devil if I could get my hands on a copy of the final book, Morning Star, right now but in the meantime I'll just have to console myself with multiple rereads of the first two books while I wait.