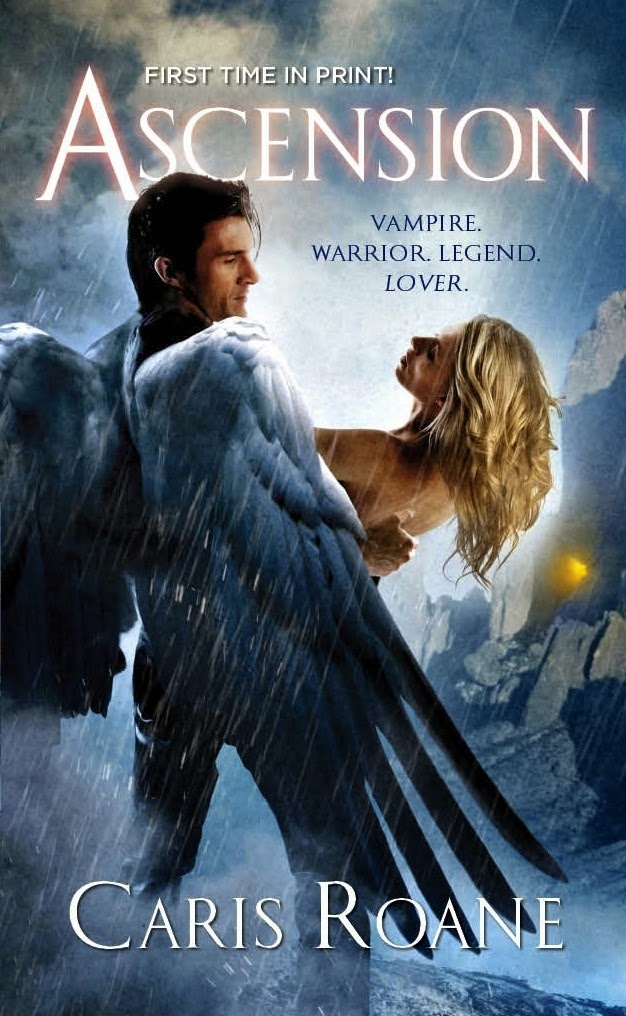 Discover a secret, sensual world of winged vampire warriors and the women they crave - in an epic battle between unearthly longing and immortal love . . .

On the wings of desire

Alison Wells is no ordinary woman. Born with supernatural powers, she can never make love to a man without putting him in grave danger. But when her special vision reveals a glorious muscled man soaring overhead on mighty wings, she feels an overwhelming attraction she cannot resist - even as he tells her: "I have come for you. Your blood belongs to me."

In the heat of passion

Kerrick is a vampire and a warrior who has fought his hunger for a woman's love for the past two hundred years. As a Guardian of Ascension, he is sworn to protect Alison from the death vamp armies who crave her blood and her power. But Kerrick has cravings of his own - a forbidden longing to open his heart and veins to Alison. To share his blood . . . satisfy his thirst . . . and seal their fates forever.

Review:
Ascension is the first book in Caris Roane's Guardians of Ascension series and it introduces readers to a world of winged vampire warriors who protect the human dimension from evil vampires who have become addicted to draining their victims to death. The world building is actually really interesting, I enjoyed the author's unusual take on vampires and I liked the idea of multiple dimensions which humans can ascend to if they have certain abilities or powers. I also enjoyed the camaraderie between the warriors of the blood, I'm a sucker for that kind of set up so it's no surprise I was excited to read this story.

Alison is a human with extraordinary abilities that have meant she never quite fitted in, she has had to keep at a distance from others so that they don't get hurt accidentally and although she has a sister she is very close with she feels isolated and alone. All she ever wanted was a family but she's never been able to risk a long term relationship since her attempts at sex always end in a trip to the hospital for her partner. Kerrick is the warrior who has been assigned to protect Alison throughout her ascension into the next dimension, it is a dangerous time and more than one side of the war are interested in Alison because of her incredible powers. Kerrick has sworn off love because he has lost too many people who are close to him but he immediately recognises Alison as his breh-hedden (fated mate) and finds her very hard to resist.

For the most part I liked Alison, I was interested by her abilities and I do love the fact that the women in this series seem to be just as strong as, if not stronger than, the men. It makes a change to have the girls kicking ass as much as the guys even if I thought the way Alison learned to fight was a bit on the ridiculous side. One thing I didn't like was how much she cries though, she seems to weep at the slightest provocation and I found it irritating to read about. Kerrick is easy to like but he's fairly standard for a paranormal romance romantic lead, there isn't anything about him that particularly stands out so I think he'll be fairly easy to forget about now I've finished reading the book. I would like to see something a bit more from the other warriors so that they stand out against the other PNR series that I read.

Although there were a lot of things to like about the story it does suffer a bit from first book syndrome, there are a lot of new terms to get to grips with (there is a handy glossary at the back of the book though) and there were times when I struggled to keep track of who the characters were and what was going on. In my opinion the story is just too long, there is a lot of repetition and I found parts of the story quite dry and boring. I got sick of reading about the way Alison & Kerrick smell (they recognise each other as their fated mates because of the scent they give off but it's mentioned CONSTANTLY) and I was also ready to scream at the number of times Alison said the words "Warrior Kerrick", yes we know he's a warrior but his name is Kerrick, you don't have to use his job title every single time you think of him! The word warrior was just overused throughout the whole story if I'm honest and I'm really hoping that is something that is toned down in the rest of the series.

The second half of the book has much better pacing though and that's where the story got its hooks into me. So much so that I've gone ahead and ordered the next book in the series so I can see what happens next. I have a feeling that this is one of those series that will just get better with each new book so I have high hopes for Burning Skies.

Source: Won in a Goodreads giveaway