Review: Risking It All - Tessa Bailey 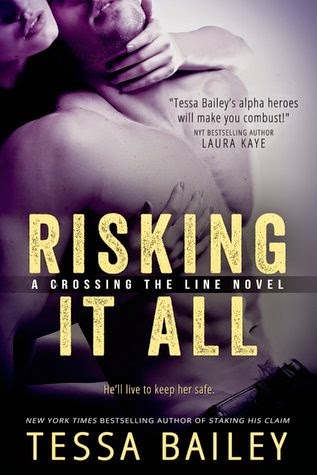 NYPD detective Seraphia Newsom will avenge her brother’s death at any cost. Even if it means insinuating herself into a rough, Brooklyn street gang and going so far undercover, she’s not sure she’ll be able to get out. Every minute she spends in their midst means the clock ticking down on her life, especially when she overhears something that could get her killed.

Bowen Driscol is the heir to a crime enterprise. He never asked for the job, but with his father behind bars, he has no choice but to step in and keep the operation running. But when the NYPD blackmails him with a piece of damning information in exchange for aiding an undercover cop, he finds himself on the other side of the law for the first time in his life.

Bowen knows the danger Sera is in, and keeping her safe trumps saving his own ass. The problem? She can’t know he’s on her side. And there's the matter of the seriously inconvenient heat sparking between them that's incinerating his resistance. But Sera only sees Bowen's past, and men like him are the reason her brother is dead. If they're to get out alive, he'll have to risk exposing the man beneath, and hope to hell he doesn't blow the whole operation in the process.

Crossing the Line Series:
Riskier Business (Novella)
Risking it All
Up in Smoke (2015)

Review:
I've been curious about Bowen ever since we first met him in His Risk to Take so of course I was excited to finally get my hands on his story. Tessa Bailey excels at writing dirty talking alpha heroes and Bowen is no exception to that, in fact I think he might just be her hottest one yet! What I love most about him is how complicated he is. Bowen would be the first person to tell you he's not a good man, in fact, he was raised to be as bad as they come. His father used to be the boss of the criminal underworld in South Boston and ever since he was sent to prison Bowen has taken over his role. Bowen has done a lot of terrible things but he's living a life he never asked for an doesn't really want and as much as he has that dark side he also has a good side to him too. He's always been very protective of his younger sister Ruby, to the point where he has now pushed her away from him to keep her safe, and he has his own code of honour that he sticks to. When undercover cop Sera gets in too deep police officers use Bowen's connection to Ruby and Troy to put pressure on him to go to her rescue. The last thing Bown needs is the added complication of a rookie cop but he can't leave her alone and unprotected so reluctantly agrees to play bodyguard.

Sera couldn't be more different to Bowen, she's a good girl who initially trained as a nurse but changed her career path after her police officer brother was murdered. All Sera wants is to put her brother's murderer behind bars but even though they know who was behind Colin's death the police haven't been able to prove it. Sera isn't willing to leave things at that though so she takes it upon herself to go undercover to find the proof she needs to get Hogan locked up for good. I ended up having mixed feelings about Sera, in some ways I really liked her but there were times when I found her incredibly frustrating. I could completely understand her need to get revenge but I struggled to believe that she'd had any kind of police training. I think I would have found it more realistic if she'd just quit her job as a nurse and gone in completely unprepared - that's certainly how she acted. Overall I was able to forgive her naivety though and I did love the slow build relationship between her and Bowen.

Risking it All is one of Tessa Bailey's hottest books yet and the fact that it was longer than most of her other stories really allowed readers the chance to connect with both of the characters. The way things ended have left me very excited to continue reading this series and I'm already hoping that Connor's story will be up next. If you love Tessa's Line of Duty series I have a feeling you're going to enjoy this one even more!