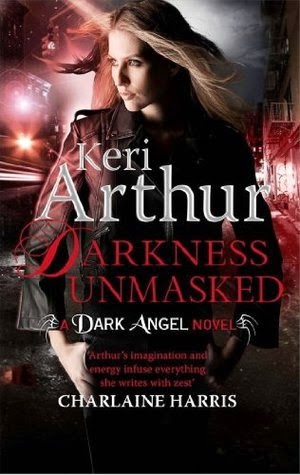 Risa Jones, a half-aedh/half-werewolf, can speak to the souls of the dying and the dead, and see Reapers, the collectors of souls. She received a phone call from Madeline Hunter, the leader of the vampire council, ordering her to investigate the death of Hunter's close friend and lover, Wolfgang Schmidt. His body has been discovered wrapped in a web-like substance and has been completely drained. As the body count continues to grow Risa must summon her gifts to find the dark spirit before it strikes again.

Meanwhile, as the search for the keys that keep the gate to Hell closed grows more intense, Risa begins to unravel mysteries that will have startling consequences for her.

Review:
I've been on a bit of a reading slump for the last couple of days so I decided to pull out the big guns and I knew Keri Arthur wouldn't fail me. I was right, this series just get better with every instalment and Darkness Unmasked was absolutely fantastic.

Risa has already been through so much but the pace just never lets up and this story sees her facing worse challenges than ever before. Hunter has set Risa the task of tracking down a murderer, one who leaves her victims little more than a dried up, empty husk that has been encased in a mysterious web. As if tracking down a murderer that seems to be part giant spider wasn't bad enough she is still trying to track down the remaining keys to hell and more than one enemy has a vested interest in her succeeding quickly. Risa is juggling a lot of balls all while trying to keep her friends safe and stop the gates to hell from being opened permanently but now more than ever she is at risk of losing everything.

I really don't want to say too much about the plot of Darkness Unmasked because I'd hate to give spoilers but oh wow Keri Arthur does not hold back in this story and she takes Risa to dark places I'd never have dreamed of even in my worst nightmares. An old enemy makes a reappearance and as despicable as his behaviour was in the past that was nothing compared to what he has up his sleeve this time around. I was shocked and horrified by what happens, not just to Risa but also to one of her closest friends, and I have no idea who that is going to effect things for the rest of the series.

It isn't all bad though and one of the things I've been loving for the last few books is the continued development of Risa's relationship with Azriel. It's been so great to see Azriel become more human in his reaction to things, I've been fascinated by his character from the beginning but I love him even more now we're starting to see his sense of humour and how much he obviously cares about Risa. Their relationship has never run smoothly and they still have more challenges to face but I have hope that they'll be able to work things out eventually.

Darkness Unmasked had me on the edge of my seat and it's left me desperate to know what happens next. I'm thankful that the entire series is already available and I'm sure I'll be devouring the remaining two books very soon. In fact, I'm planning on diving right into Darkness Splintered as soon as I finish writing this review!