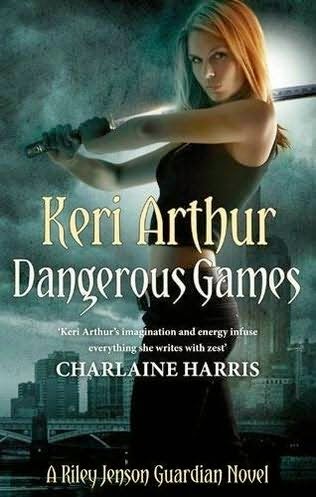 In Melbourne's urban underworld, there's a place for every fetish and fantasy. But for Riley Jenson, one such nightclub has become an obsession. Riley, a rare hybrid of werewolf and vampire and new agent for the Directorate of Other Races, hasn't come in pursuit of pleasure but of an unknown killer who's been using the club as his hunting ground.

Leave it to Riley to find the only ticket into the heavily guarded venue: Jin, a deliciously hot-bodied bartender who might just provide the key to unmasking a killer unlike any other in the Directorate's experience. Taunted by a former colleague gone rogue, Riley follows Jin into a realm of pleasure she could never have imagined but as danger and passion ignite, a shocking mystery begins to unravel - one where Riley herself becomes the ultimate object of desire...

Review:
Riley and her brother Rhoan are investigating the murder of several women who have been killed in what appears to be a ritualistic manor. She may have fought against becoming a Guardian but now she has been forced into the role she is determined to do her job well. As their investigations lead them to a fetish club it is up to Riley to infiltrate the club and track down the murderer.

Dangerous Games is the fourth book in the Riley Jenson series and although this probably could be read first as the main background plot has started a new storyline I would recommend reading the series in order so you know the history of the characters. I'm really enjoying this series though & would recommend it to any urban fantasy fan. To give a slight warning though - Riley is a werewolf with a strong sexual appetite who has several regular partners and also uses sex in her role as a Guardian to gain information about her enemies. If that is going to be something that bothers you then I'd suggest skipping this series but I would definitely recommend trying Keri Arthur's Nikki & Michael series or Spook Squad series instead.

I really love Riley Jenson - she is one of my favourite urban fantasy characters - she knows what & who she is and makes no apologies for her werewolf nature. She didn't ask to become a Guardian and parts of the job do bother her but since she was forced into her role she is determined to make the best of it. Her character has been through a lot since the beginning of the series with betrayals from people she trusted and physical changes after she was given experimental drugs. I'm finding it really interesting seeing how her psychic abilities are changing and am curious to see what abilities she will gain next.

I loved Quinn in the first book but since then he has been really irritating me with his refusal to accept Riley the way she is.  He says he loves her but the way he is constantly trying to change her has been getting on my nerves for a while now.  I think they could be a good couple if only he'd learn to accept her but I'd got to the point where I felt enough was enough - I was very pleased to see Riley coming to the same conclusion in this instalment. For once she refused to listen to her hormones (that will always draw her to Quinn) and put her foot down. I think we'll probably see more of Quinn in the future but I hope he has a change of attitude in the meantime!

I would have liked to have seen a bit more of her other regular partner, alpha werewolf Kellen, in this instalment but I can understand why that wasn't possible with the storyline. The mystery surrounding the murders moves along at a good pace and kept me interested. I'd say this is probably one of my favourite books in the series so far and it's left me looking forward to reading book five Embraced by Darkness.