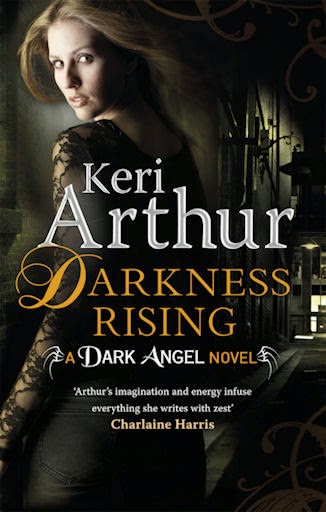 Risa will go to any lengths to avenge her mother's murder - even if it means making a pact with the most evil vampire she's ever met. Lethal and powerful, Madeline Hunter is leader of the vampire council and will put her resources behind finding the killer - for a price. The venerable vampire requires the assistance of Risa's psychic powers. Quid pro quo.

Someone - or something - is targeting the elders of the local council, cursing the immortal vampires to rapidly age, sink into madness and die. Risa must track down the vengeful being responsible. But Risa's father a rogue Aedh priest, also enlists her in a dangerous mission. And not even the great Madeline Hunter may be able to protect her from the shadowy forces that desire nothing less than Risa's destruction.

Review:
As a huge fan of the Riley Jenson series I was excited that Keri Arthur decided to continue writing about this world from Risa's point of view. For fans like me it is fantastic to get glimpses of some of our favourite original characters but at the same time I think the author has done a great job of getting us invested in the lives of Risa and her friends. After the utterly heartbreaking events at the end of Darkness Unbound I knew Risa was going to be in for a tough time of it in Darkness Rising and I wasn't wrong, everything is against her in this book and she's forced to make some very difficult decisions.

Risa is still grieving for her mother but more than anything she is determined to find out who was behind her murder so that she can make them pay. She is desperate for revenge and will do whatever it takes, even if that means working for Madeline Hunter, head of the vampire council, to achieve her goals. The last thing Risa really needs is to be caught in Madeline's spotlight and forced to investigate the deaths of some very old and powerful vampires but she doesn't have a choice if she wants access to information that only Madeline can provide. As if her two different investigations weren't enough to worry about her father, the Adeh who has been absent for her entire life, makes a sudden reappearance and he has an important task for her. Failure isn't an option unless Risa wants her friends to pay the price.

I'm really enjoying getting to know Risa, she isn't as strong as Riley was but she's still quite kickass in her own way and she definitely refuses to back down from a challenge. I love the supportive friendships she has with her room-mates Tao and Illiana and the way all three of them have each other's backs no matter what. I'm not a fan of the newly introduced character Lucien but I absolutely adore Azriel. We get to see a more human side to him in this instalment and I think he's really starting to care for Risa, I definitely want to see more of the two of them as the series continues because I'm loving the hints we're getting of the chemistry between them. I have a feeling if they ever give into that desire things are going to be explosive.

This series has a good amount of action making it real page turner that I didn't want to put down. I love the humour throughout the story too along with the camaraderie between Risa's group of allies. I have a feeling things are going to get even more complicated thanks to Madeline's interest in Risa, I wouldn't trust that woman as far as I could throw her and we've seen from her interactions with Riley that she always has an ulterior motive. I just hope Risa hasn't got herself in over her head and I guess I'll have to read Darkness Devours ASAP to find out.