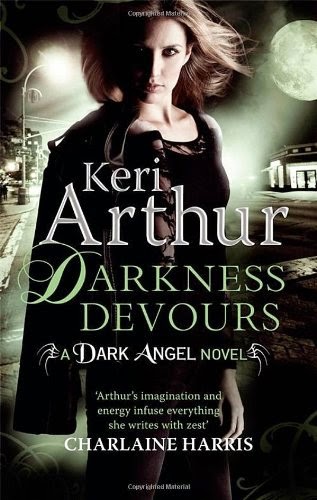 Half-werewolf, half-aedh Risa Jones can enter the realm between life and death, and she can see the Reapers who collect the souls of the dead. Now she is using her gifts - and the investigative know-how of a man who broke her heart - to find a cabal searching for the power to control time, reality and fate. And this is beside her work for the Vampire Council, half of whom want her dead.

But for now the Council needs her alive. Someone is killing blood-whore addicted vampires, and Risa must find the guilty party. If she succeeds, she may finally convince the council to lift the execution order on her life. But before she succeeds, she must first survive . . .

Review:
The Dark Angels series is just getting better and better with each instalment and I'm excited that the rest of the books are already available so I'm going to be able to devour them in quick succession. I'm a huge fan of Keri Arthur and she never disappoints so if you've not read these books (or any of her others!) then I'd definitely recommend them. You do need to read this series in order starting with Darkness Unbound though so if you're new to this series please don't carry on reading this review or you'll probably end up with spoilers!

Now that Risa has been coerced into working for Madeline Hunter and the rest of the Vampire Council she's in a very difficult position. She only made the deal for Hunter's help finding out who murdered her mother but since they're not offering her much in the way of assistance she is getting the raw end of things since they're constantly testing her. As much as she wants to tell Hunter where to go Risa knows that wouldn't be good for her health, as it is half of the Council want her dead and the only way to get them off her back is to solve the mystery of who is murdering blood-addicted vampires. Luckily she's got reaper Azriel on her side but even he can only do so much and she'll be lucky to survive the latest case.

I think the thing I love the most about this series is the characters, Risa's two very good friends Tao and Illiana have both proved time and time again that they would do anything for Risa and it's obvious how much they all care for each other. Risa doesn't want to get them involved but neither of them are going to walk away easily. My favourite character from the beginning (aside from Risa of course) is without a doubt Azriel, he has always stolen the show every time he steps onto the pages and that's no exception here. I am absolutely loving seeing his relationship with Risa grow, I have a feeling he's keeping more than a few secrets but I don't doubt for a second that he would do anything to protect her. I was actually pleased that we saw less of Lucien in this instalment, I've never particularly trusted his character and I'm convinced that he has his own agenda that doesn't necessarily include looking out for Risa's best interests. I'm hoping we'll find out one way or the other soon and that Risa will send him out of her life on a permanent basis!

We do get to meet an interesting character from Risa's past too, Jak is the werewolf who used her to write a story about her mother and broke her heart in the process so I was predisposed to hate him but he's actually incredibly charming. I'm glad that Risa doesn't trust him and isn't planning on letting him get too close again in the future but I did end up quite liking the banter between them and the way he constantly teases her. Jak isn't a great guy, he fully admits that the story is always the most important thing to him and that he'll do whatever it takes to get it, which definitely doesn't make him trustworthy but he's not a bad person for Risa to have in her corner the whole time their interests align. He has useful contacts and he's willing to help Risa as long as there is something in it for him in the long run.

I think Darkness Devours was probably the most action packed story in the series so far, Risa has a lot to deal with and there are plenty of obstacles in her way so be prepared for some new and interesting enemies to pop up. I love the way Keri Arthur is always expanding on her world building to add new creatures and legends because you really never can guess what she'll throw at you next. I can't wait to dive into Darkness Hunts to see what's next for Risa and crew.