Review: Burn for Me - Ilona Andrews 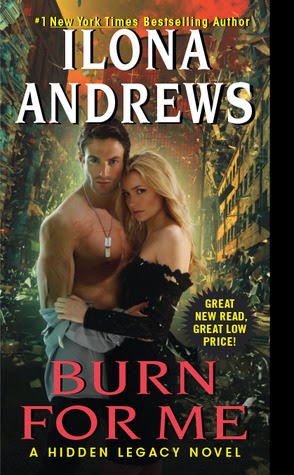 #1 New York Times bestselling author Ilona Andrews launches a brand new Hidden Legacy series, in which one woman must place her trust in a seductive, dangerous man who sets off an even more dangerous desire…

Nevada Baylor is faced with the most challenging case of her detective career—a suicide mission to bring in a suspect in a volatile case. Nevada isn’t sure she has the chops. Her quarry is a Prime, the highest rank of magic user, who can set anyone and anything on fire.

Then she’s kidnapped by Connor “Mad” Rogan—a darkly tempting billionaire with equally devastating powers. Torn between wanting to run or surrender to their overwhelming attraction, Nevada must join forces with Rogan to stay alive.

Rogan’s after the same target, so he needs Nevada. But she’s getting under his skin, making him care about someone other than himself for a change. And, as Rogan has learned, love can be as perilous as death, especially in the magic world.

Review:
I'm a massive fan of Ilona and Gordon Andrews's Kate Daniels series, in fact I'd put it right up there as one of my favourites, so of course I couldn't wait to dive into their newest novel and explore another world they've created in Burn for Me. When I pick up a story from a favourite author I always go into it with high expectations and sometimes that can work against me but this husband and wife team have never let me down and with each new book they consistently hit the ball out of the park. They excel at excellent world building, creating strong female lead characters, sexy heroes and fantastic casts of side characters and that is exactly what they've done again in Burn for Me. I wanted to climb into the book and live there, Nevada would make a great friend although I don't think she'd appreciate me having such a big crush on Rogan LOL.

Nevada is a private investigator in charge of running her family business, they're a small operation and money is tight so Nevada is under a lot of pressure to keep her family stable financially. She has a close relationship with her mother, grandmother and younger cousins and siblings but as the main breadwinner she has a lot on her shoulders. When she is asked to take on a case against a Prime magic user she knows she has very little chance of succeeding but the money she could earn would make a huge difference to her entire family and it's not like she has much choice other than to accept. As if going up against a Prime wasn't bad enough the case also brings her to the attention of Mad Rogan, an eccentric billionaire and powerful magic user in his own right. Rogan doesn't play by the rules and he will do whatever it takes to get what he wants, for now it is in his best interests to work alongside Nevada but she knows she can't trust him to have her back if their goals change which makes him trouble.

I absolutely loved the world that Ilona Andrews has created, the magical system is well explained and thought out and the idea of the powerful magical families having mob like control over certain areas was a brilliant one. These families do whatever it takes to protect their interests and to keep their bloodlines pure and it is safer to stay under their radar, something Nevada and her family have always tried to do in the past. Her latest case drags her right into the middle of things though and she's now stuck in an impossible situation. She isn't powerful enough to tackle the case on her own but accepting help from one family could set the others against her. Nevada is a great lead, she is strong and intelligent, she knows her own mind and she doesn't let anyone get away with pushing her around. She cares about her family and is willing to risk everything to keep them safe but as much as she would prefer to go it alone she is willing to accept help when she needs it. I loved the relationships she has with her various family members, in fact, the whole family was just so much fun to spend time with. There are some quite eccentric characters amongst them but I mean that in the best possible way and I can't wait to see more of them as the series continues.

Then you have Mad Rogan. What can I say about Rogan apart from that I have the biggest crush on him? Nevada and Rogan don't get off to the best start and considering that Rogan kidnaps her trying to get information that isn't too surprising. Technically I shouldn't like Rogan for that incident alone but oh boy do they have some fabulous chemistry going on between them. I loved the fact that Nevada didn't instantly forgive Rogan and act on her attraction to him, in fact she is fighting it all the way because she is still annoyed at his behaviour but he's definitely wearing her down and I can't even blame her for that. Rogan is dangerous with a capital D. He isn't the kind of guy who lets anyone close easily and if you're not part of his family then he really has very little interest in what happens to you. He doesn't have standard morals so if you're not an ally you're automatically a potential enemy and he'll have no reservation about doing whatever it takes to make sure you give him what he wants. However, once he has given someone his loyalty they can trust him to have their backs no matter what. Nevada starts to see that but it's going to take a lot before she accepts that they are anything beyond convenient, and temporary, allies for the length of their current case. I'm incredibly excited about seeing them spending more time together and I'm also looking forward to seeing Nevada start to get more control over her abilities.

I could rave on and on about Burn for Me but if I haven't already convinced you to give this series a try then I don't think anything else I could say will make a difference. This is a fantastic start to the Hidden Legacy series and any future books will be going immediately to the top of my to read pile.