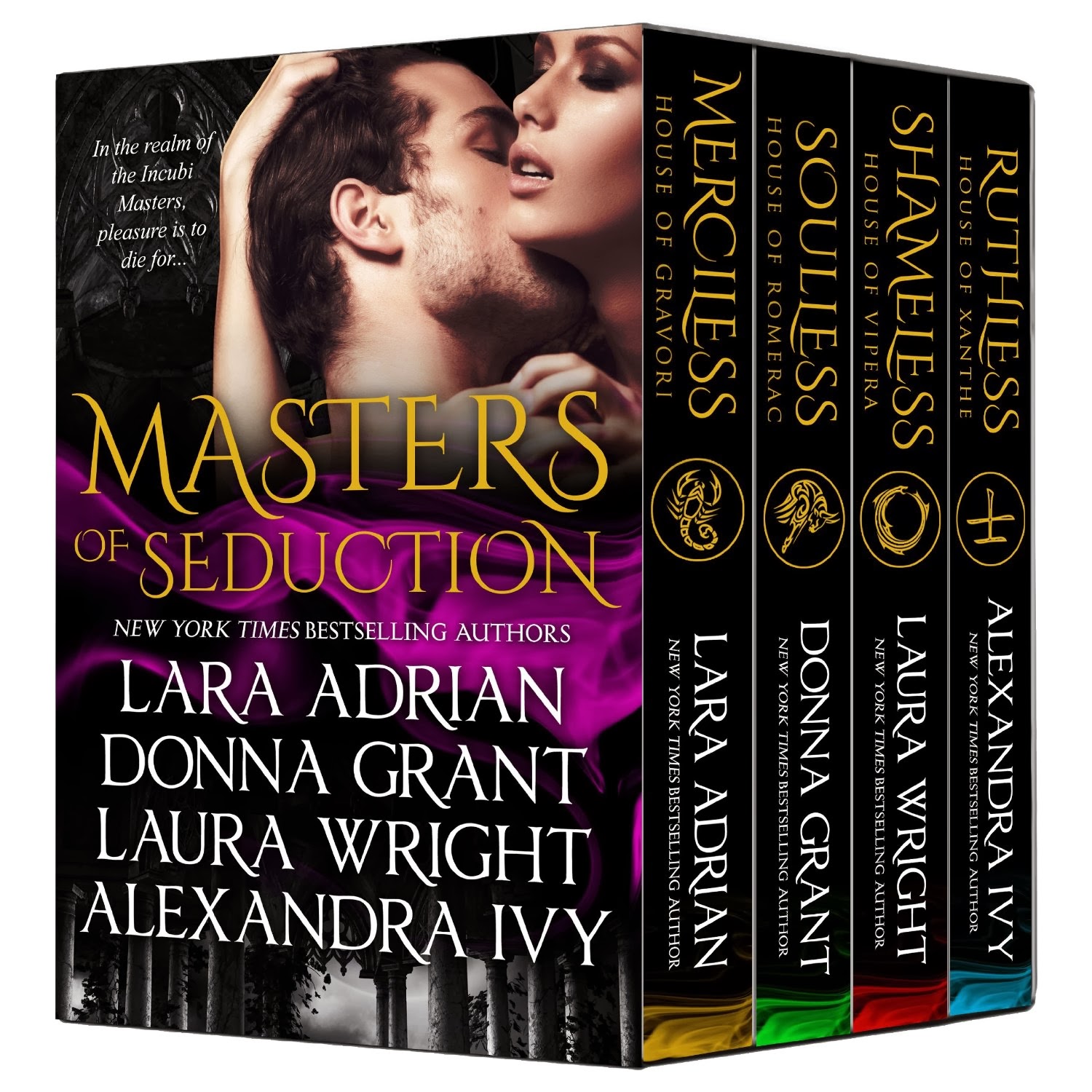 In the realm of the Incubi Masters, pleasure is to die for and love is the deadliest game of all . . .

MERCILESS: House of Gravori ~ by Lara Adrian
Seeking vengeance for the murder of his brother, Incubus Master Devlin Gravori demands justice from the high court of the Nephilim. But fury and retribution are no match for the consuming desire he feels for Nahiri, the beautiful Nephilim warrior he claims as his hostage.

SOULLESS: House of Romerac ~ by Donna Grant
Incubus Master Canaan Romerac is focused solely on revenge against those who betrayed him and put him in the Oubliette for five hundred years. That is until he sets eyes on Rayna. Can the beautiful Nephilim heal Canaan’s wounded soul before it’s too late?

SHAMELESS: House of Vipera ~ by Laura Wright
Sexy Incubus Master Scarus Vipera has grown weak, and the only thing that will strengthen him again is Rosamund, the power-rich female of the Harem. But the mysterious Nephilim is determined to leave the Harem untouched, her heart intact.

RUTHLESS: House of Xanthe ~ by Alexandra Ivy
Jian, Master of the House Xanthe, has devoted his life to returning his family to their former prominence. When he’s offered a contract to hunt down the missing Sovereign, he’s eager to accept. The last thing he expects is to encounter a stunningly beautiful angel who stirs more than his lust.

For more information about any of these authors you can visit their websites by clicking the links below:
Lara Adrian
Donna Grant
Laura Wright
Alexandra Ivy

Review:
This is the first volume in the new Masters of Seduction series by four bestselling authors Lara Adrian, Donna Grant, Laura Wright and Alexandra Ivy. I've read books by all of these authors before and I'm a huge fan of Lara Adrian so I had high hopes for these novellas and I did enjoy the anthology. I have to say I would have loved for each of the stories to have been longer so that the authors could have given us more relationship building rather than the pretty instant connections that we get here but I expect shorter romances in novellas so this didn't bother me too much.

Merciless - Lara Adrian
Devlin is seeking justice after his brother's murder and when the nephilim priestesses aren't able to resolve the situation he takes Nahiri, one of their warriors, hostage. Nahiri and Devlin uncover a conspiracy that is much larger than one murdered incubus and this sets the scene for the whole series. This was a really enjoyable story full of passion and quite a sweet romance.

Soulless - Donna Grant
Canaan has been trapped in the Oubliette (the nephilim prison) for over 500 years after he was betrayed by someone close to him. Now he has escaped and he is determined to find out who was behind his imprisonment and make them pay. Rayna is a nephilim and therefore should be considered the enemy but she is the only one who can help him uncover the truth and as they work together they fall in love. I enjoyed this story a lot but I did feel that the big showdown against Canaan's enemy was resolved a little too quickly and easily, I think this could have been a much better story if it had been longer.

Shameless - Laura Wright
Incubus Scarus is visiting the nephimi harem because he desperately needs to feed, he has chosen Rosamund because he can feel her power but Rosamund never wanted to be picked for the harem and she has no intention of letting Scarus get close to her. This was my favourite story in the anthology, it actually seemed to be almost outside of the timeline for the rest of the series because it had much less focus on the ongoing plot but that meant there was much more focus on the main couple and the romance between them and is probably why I liked it so much.

Ruthless - Alexandra Ivy
Jian is a spy investigating the conspiracy that Devlin discovered and he has returned to the Oubliette where Canaan was held captive looking for more clues. While there he meets the Muriel, an angel who is much more than she seems and who may hold the key to uncovering what is really going on and who is behind the plot against the incubi.

Masters of Seduction is an enjoyable anthology of short but hot reads by some fantastic authors. It's an anthology I enjoyed reading and I'm looking forward to seeing how things play out in the next volume of the series.