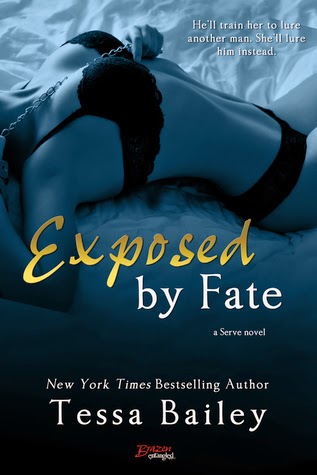 He’ll train her to lure another man. She’ll lure him instead.

Oliver Preston isn’t one to turn down pleasure, but Eliza’s his sister’s best friend, and he’s torn between a sense of duty and his rock-hard need to find out if she tastes as delicious as he’s dreamed. Unable to handle thought of another man owning her body, he draws Eliza deep into his world of exquisite pain and pleasure. He has three lessons to instruct her. Three lessons to drive them both to the brink of ecstasy. And three lessons before he must give her to another man . . . if he doesn’t lose himself first.

Review:
I love Tessa Bailey's Line of Duty series so I had high hopes for her new Serve series which is set around a BDSM club. Unfortunately I wasn't a huge fan of the first book but that was more down to the fact that I hated the heroine than anything else so I took a second chance and bought the second book too. I'm so glad I did because Exposed by Fate was everything I wanted from Owned by Fate and more, in fact I think I now have a new favourite Tessa Bailey hero in Oliver, he was absolutely fabulous!

Eliza is keen to explore her newly discovered submissive side but she's wary of testing the waters with a stranger when she has no real idea about what she will enjoy or what will be expected of her. Oliver is her best friend's older brother and as a playboy and a regular at Serve he would be the perfect person to teach her the art of submission. Her only fear is that she could end up getting her heart broken if she doesn't keep him at a distance. Oliver has craved Eliza for a long time but he knows he's not a one woman man and would never want to hurt her. The pair agree on three lessons thinking that will be enough for Eliza to learn what she needs to know but not long enough for either of them to get attached. What they don't expect is the instant, deep bond that they both feel and it's not long before they realise that the lessons are changing them both but will either of them be brave enough to admit that three lessons will never be enough?

Tessa Bailey has always excelled at her dirty talking heroes and Oliver is no exception to that, he is completely masterful in the bedroom (and the shower, and on the conference room table, and .. well you get the picture!) so we are treated to some completely knicker melting scenes that will leave you desperately needing a cold shower. Eliza may be inexperienced but inexperienced doesn't equal shy and she's more than willing to jump into her lessons with both feet. She has done her research and she trusts Oliver to always have her best interests at heart so she doesn't hesitate to accept anything he suggests. The two of them have fabulous chemistry but more than that they have a solid base of friendship and I loved the way Oliver was able to talk to Eliza about her fears and make her realise that there is nothing wrong with her desires. Eliza is a strong heroine, she loves to submit in the bedroom but in all other areas she is strong and feisty and more than capable of keeping Oliver on his toes, she is also the one person who believes in him. Oliver has always been on the outside looking in when it comes to his family, he's never felt good enough or that he could live up to their expectations but Eliza sees past that to the man he is inside and she helps him gain confidence in his business life which was great. I liked the balance between them and the fact that they are both better together than they were apart.

Exposed by Fate was a fab story and one I thoroughly enjoyed. If you're looking for a hot and spicy romance with plenty of dirty talk and a little exhibitionism you will love this one. I'll definitely be buying future books in the series as soon as they're available!