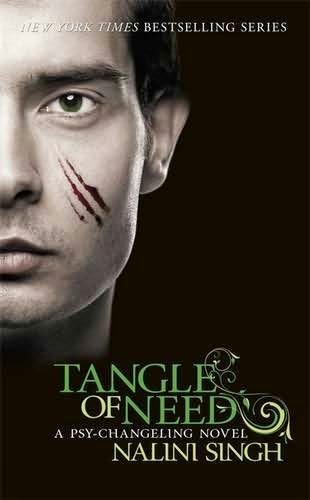 Adria, wolf changeling and resilient soldier, has made a break with the past. Now comes a new territory, and a devastating new complication: Riaz, a SnowDancer lieutenant already sworn to someone else.

For Riaz, the primal attraction he feels for Adria is a staggering betrayal. For Adria, his dangerous lone-wolf appeal is beyond sexual. It consumes her. It terrifies her. It threatens to undermine everything she has built of her new life. But fighting their wild compulsion towards one another proves a losing battle.

Their coming together is an inferno . . . and a melding of two wounded souls who promise each other no commitment, no ties, no bonds. Only pleasure. Too late, they realise that they have one more to lose than they ever imagined. Drawn into a cataclysmic Psy war that may alter the fate of the world itself, they must make a decision that might just break them both.

Review:
Adria and Riaz take an instant dislike to each other when they both return to the heart of SnowDancer's territory but that's more because they are both disturbed by the strong sexual appeal they feel towards each other than anything else. Both of them have reasons not to be interested in pursuing a relationship and have no intention of acting upon their attraction but sometimes chemistry can't be ignored and the pull between them is just too strong to resist for long. What starts with the promise of a no strings affair quickly turns into something so much stronger but with so many things against them do they have any chance of creating a lasting relationship?

We first met Adria in Indigo and Drew's book so we already had a pretty good understanding of her relationship with her ex Martin. It wasn't a happy relationship, Martin resented Adria's strength and dominance which led to problems between them and meant Adria was constantly trying to change her personality to make him happy. It's no surprise that she's come out of that relationship wary, no matter how badly things ended up she had loved Martin in the beginning and she doesn't want to risk putting herself into a similar situation again. Riaz is someone I've been wanting to know more about ever since we first met him and found out that his mate was already married to someone else when he met her. He walked away from his mate because he could see that she was in love and happy but that doesn't mean his heart doesn't ache from the loss of what should have been the most important person in his life. Riaz never had a chance with his mate, they were never a couple and she doesn't even know how he feels about her but in spite of that his attraction towards Adria feels like a betrayal.

The chemistry between Adria and Riaz is off the charts from the moment they meet, they practically melted my kindle with the unrestrained desire between them so I was glad they didn't take too long to give into temptation. It was interesting to see a couple who don't have the benefit of the mating bond to strengthen the relationship between them, they fall in love but Adria finds it difficult to believe that Riaz wouldn't leave her in a heartbeat if he had a chance to be with his real mate. Riaz is the one who accepts his feelings towards Adria more easily, he quickly realises how strong their connection is and he knows that nothing would ever be able to tear them apart. He is so sweet and gentle with her and I couldn't help falling a little in love with him myself seeing how much he cares about her. Adria obviously loves Riaz too, in fact, the way she was willing to let him go because she loves him so much was more than a little heartbreaking and I was glad that they were able to work things out in the long run.

As much as I enjoyed the developing romance between Adria and Riaz I think my favourite scenes in the book were focused on Hawke and Sienna. I loved getting to see how their relationship is progressing and their mating ceremony was absolutely wonderful, they are the heart of the pack and I just love seeing Sienna grow in confidence now that she has Hawke at her side. There are also some wonderful scenes with Mercy and Riley that melted my heart a little and Judd gets another chance to shine as we learn more about both the Arrow squad and Kaleb (boy I can't wait to start his book!!). Of course it wouldn't be a Nalini Singh book if there wasn't danger and the changeling's psy enemies are definitely on the war path. Things in the PsyNet are worse than ever and Silence is on the verge of failure which will effect not just the entire psy population but also the changelings and humans. Things are getting incredibly tense and I have no idea how they can be resolved. This whole series is just packed full of amazing characters that I can't get enough of and I'm excited to find out what happens next.