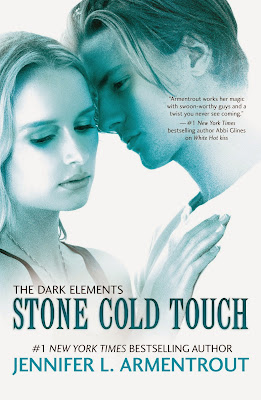 Every touch has its price

Layla Shaw is trying to pick up the pieces of her shattered life—no easy task for a seventeen-year-old who’s pretty sure things can’t get worse. Her impossibly gorgeous best friend, Zayne, is forever off-limits thanks to the mysterious powers of her soul-stealing kiss. The Warden clan that has always protected her is suddenly keeping dangerous secrets. And she can barely think about Roth, the wickedly hot demon prince who understood her in ways no one else could.

But sometimes rock bottom is only the beginning. Because suddenly Layla’s powers begin to evolve, and she’s offered a tantalizing taste of what has always been forbidden. Then, when she least expects it, Roth returns, bringing news that could change her world forever. She’s finally getting what she always wanted, but with hell literally breaking loose and the body count adding up, the price may be higher than Layla is willing to pay . . .

Review:
After the shocking ending of White Hot Kiss I was really looking forward to diving into Stone Cold Touch to see what happened next. Would Layla be able to find a way to rescue Roth after he gave up everything to save her and Zayne? Would Zayne finally admit he had feelings for her? How would Layla decide between the boy she has loved since she was a child and the one who came into her life more recently but has always accepted her for who she is and has never tried to change her?

I hate to say it but I was actually kind of disappointed with this instalment of the series. As much as I got answers to my questions I wasn't happy that so much of the book was focused on the love triangle. I guess I should have known that was going to happen when I first heard that Jennifer L. Armentrout was going to let her fans vote for who Layla ends up with and the answer would be revealed in book three, Every Last Breath. I'm just so, so sick of love triangles, especially where the only thing the girl seems to think or care about is the two guys who are chasing her. Layla really did start to drive me bonkers with the way she was getting closer and closer to Zayne but still constantly thinking about Roth. It would have been more understandable if he hadn't been such a complete and utter ass when he came back from Hell but even though he never apologised to her or gave her any explanation for his actions (until right near the end of the book) she seemed to instantly forgive him just because he started being nice again.

In the last book Zayne had irritated me towards the beginning, I was annoyed at the way he and the other Wardens treated Layla but towards the end of the book he definitely took steps to apologise for his behaviour and he had her back when she needed him most. Thankfully in this story he was there for her from the very beginning. I loved the way he stood up to his father and the other Wardens on her behalf and he was so incredibly sweet and romantic when he was trying to show her how much he cared. I'd been firmly on team Roth in the last book but I was actually very tempted to switch sides here. Roth on the other hand seemed to have switched places with Zayne and at the beginning of the book he says some really mean things to Layla. I had a feeling that there was a reason behind his actions (and this was proved correct when he explained himself later on in the book) but he really hurt Layla and I was irritated by the way he then started to act like normal around her as if nothing had happened. It annoyed me even more that Layla let him get away with that and continued to blindly trust him even after he'd broken her heart. I just didn't believe that she would forgive him so quickly when he hadn't apologised or explained himself yet and thought she would have been much more wary of him.

That leads me to another issue I had with this story - Layla's stupidity. She makes so many idiotic decisions that it's amazing she survived to the end of the book. There were times I wanted to climb inside my kindle and shake some sense into her! I do feel incredibly sorry for her though, she has spent her whole life being treated as someone less worthy by the Wardens because of her parentage. She didn't chose to be born half demon / half Warden and I hated the way they treated her because of something that was out of her control. This gets even worse in this story and Zayne's father in particular does some truly unforgivable things. As much as I had issues with parts of this book I did still find it incredibly readable, Jennifer L. Armentrout has a way of writing that draws you immediately into her worlds and even when I'm frustrated I never once find myself considering giving up on reading the books. I honestly can't decide which team I'm on any more, I fell completely in love with Zayne in this book but I still have a crush on Roth, especially after the things he says towards the end of this book. I actually think this is the first time that I can say that I think I'll be happy with whichever choice Layla makes and I'll definitely be grabbing a copy of Every Last Breath to see her decision!

Roth or Zayne - who will Layla pick?