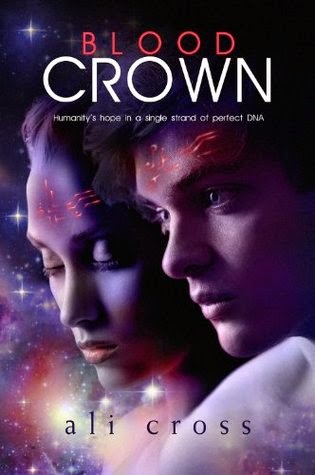 Androids have claimed power over what remains of the human race. They rule without remorse. They are the Mind and humans exist only to serve them.

But it wasn't always so.

Before the android uprising, select droids, called Servants, were pivotal in engineering a new human race with nanotechnology enhanced DNA. The Blood Crown theorum was to be humanity's crowning glory and the key to their survival in deep space.

But Serantha, Daughter of the West, was the last female to receive Gifts from her Servant and when the Mind mutinied, she was hidden away, and presumed dead.

Without Serantha there is no hope of the Blood Crown being realized so Nicolai, Son of the East, abandons his crown to join the rebel forces. He might not provide the future for his people he had once dreamed of, but he will not go down without a fight.

When Nicolai discovers Sera among a small compliment of kitchen staff, everything changes--but Sera's Gifts were never completed and she is ill-equipped to face a legion of androids determined to wipe her, and every other human, out of existence.

Their only hope is the Blood Crown--but even if Serantha and Nicolai can realize their potential it may be too late to save mankind.

The Eden Project:
Blood Crown
Further titles and release dates to be confirmed

Review:
In a future where the Earth can no longer support life and humanity has been forced to live on giant State-Ships in space for over 1,000 years we are on the verge of possible extinction. The androids that were built to serve us have rebelled and taken control, they have kept a few humans as slaves but they seek to exterminate the rest of the population. Humanity's only hope is an old prophecy, one that promises when the royal families of the East and the West combine they will create the Blood Crown, the ultimate in human evolution. Humans have been adding nanotech to the Royal DNA for centuries slowly turning them into something more, but it will take combining the two lines to create something truly special, something with the power to save them all.

Although Nicolai, the Prince of the East, is playing a key role in the human rebellion Serantha, the Princess of the West, is missing presumed dead. Nicolai knows he can't fulfil the prophecy on his own but he refuses to give up hope of wining the war against the androids. Sera was nearly killed alongside the rest of her family when the androids took control but she was saved by Archibald, the android who raised her. Archibald had to wipe Sera's memory before he hid her amongst the servants and in the years since she has lived a life of hardship and fear. Sera is the only one who can save them all but she will need to regain her missing memories first and can only save her people with Nicolai's help.

Blood Crown came highly recommended by my friend Erica and now I've read it I can completely understand why - it's such a fantastic YA story and I loved every minute of it. Ali Cross throws readers straight into the action and manages to make you feel invested in the characters very quickly. The story is told from three different points of view - Archibald tells us of the risks he took to get Sera to safety and how he managed to keep her identity a secret, Sera allows us to see the lives of the human servants and how they are treated by the ruling androids and Nicolai shows us the war that the rebels are waging even though they know they have little chance of success.

The story is action packed from the very beginning and the author manages to introduce an interesting and complex world without using massive info dumps. I loved seeing the different technology and the way that Sera was able to interact with her ship using her nanotech. In fact, I just loved Sera's character, she has been through so much but she never lost her humanity, in spite of the way she was treated by some of the other servants. Even before she knew her true identity she has done her best to protect others and I loved how kick ass she was. I was a little nervous when she first met Nicolai that their relationship might move too quickly but I actually found things progressed between them at a believable pace. They are initially wary of each other and although I was irritated with Nicolai for keeping secrets from Sera I was glad that they took time to get to know each other rather than blindly trusting because of who they were. What I liked most about them was how well matched they are, they have mutual respect for each other and they walk side by side into battle knowing they've got each other's backs.

Blood Crown is a must read for YA sci-fi fans, it's such a fun story with great characters, fab world building and a Cinderella / fairytale feel to it. I will definitely be bumping the sequel to the top of my to read pile the minute it's released but in the meantime I think I'm going to have to check out some of Ali Cross's other books because I love her writing style.