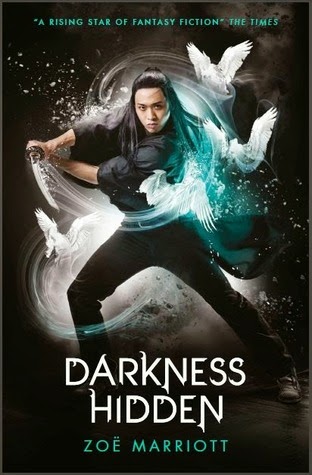 Against all odds, Mio, Jack and Shinobu have defeated the terrifying Nekomata. But Mio is still compelled to protect the katana, her family's ancestral sword, and now the Underworld has spawned a worse monster - one carrying a devastating plague that sweets through London like wildfire.

As Mio struggles to protect the city and control the sword's deadly powers, she realises that there is no way she can keep everyone she loves alive . . . and she must make a terrible sacrifice to save the world.

The Name of the Blade Trilogy:
The Night Itself
Darkness Hidden
Frail Human Heart

Review:
I loved The Night Itself and have been looking forward to Darkness Hidden ever since I finished it so it's been a long year waiting for this release. Sometimes you pick up the second book in a trilogy only to find yourself disappointed by a book that feels like padding for the rest of the series but happily that isn't the case here and Zoe Marriott has given us a story that is just as strong, if not stronger, than the first book.

Mio may now have a better idea of what her katana is capable of but she also knows the risks she takes by using it. She is more aware than ever how important it is to keep the sword out of enemy hands but she is equally scared of using it for protection in case it gets a stronger hold over her. Unfortunately her enemies aren't going to give her a chance to rest now that she has defeated the nekomata and they are now sending even more powerful creatures her way. Creatures that are spreading a plague across London while they search for her, ones that could cost the lives of not just her friends and family but of every human in the city. Mio is running short on allies and she's going to have to face some very difficult decisions if she wants to save the people she loves the most.

Darkness Hidden is just as action packed as the first book, we are introduced to more creatures from Japanese mythology and the stakes are raised higher than ever for Mio and her friends. This is the kind of book that it is easy to devour in one sitting, the characters are all fantastic and well rounded and I enjoy spending time with them. I love exploring the mythology and I'm thoroughly enjoying how unique this series is compared to so many other YA books I've read. As a paranormal fan I've read so many books about vampires and werewolves and it's just great to come across something that stands out from everything else. The ending completely shocked me and it's left me desperate to get my hands on Frail Mortal Heart. I have a feeling this series will go out with a bang and I can't wait to see how Zoe Marriott concludes things.