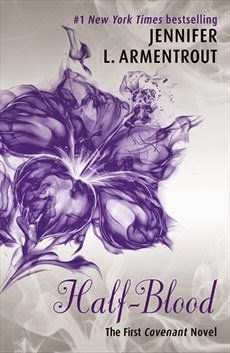 The Hematoi descend from the unions of gods and mortals, and the children of two Hematoi, pure-bloods, have godlike powers. Children of Hematoi and mortals - well, not so much. Half-bloods only have two options: become trained Sentinels who hunt and kill daimons or become servants in the homes of the pures.

Seventeen-year-old Alexandria would rather risk her life fighting than waste it scrubbing toilets, but she may end up slumming it anyway. There are several rules that students at the Covenant must follow. Alex has problems with them all, especially rule #1:

Relationships between pures and halfs are forbidden.

Unfortunately, she's crushing hard on the totally hot pure-blooded Aiden. But falling for Aiden isn't her biggest problem - staying alive long enough to graduate the Covenant and become a Sentinel is. If she fails in her duty, she faces a future worse than death or slavery: being turned into a daimon, and being hunted by Aiden. And that would kind of suck.

And discover the very beginnings of Covenant in the prequel novella . . . Daimon

Review:
Half-Blood is the first full length novel in the Covenant series but the UK paperback version also includes the prequel novella Daimon. Although this novella is placed at the back of the book it is set before Half-Blood so I would recommend reading that first. You can read my full review of Daimon HERE but I'll say again that it is a fantastic start to the series and will definitely have you gripped and eager to continue on to Half-Blood!

Like everything else I've read by Jennifer L Armentrout I found Half-Blood incredibly easy to read, she quickly drew me into her story and I found myself enjoying it immensely while I was reading. I have seen a lot of people compare this to Richelle Mead's Vampire Academy series and while I noticed similarities in the prequel novella it was in Half-Blood that it really started to become obvious. I hate to compare series but I do think that anyone who has read Vampire Academy will be able to write a whole list of things that are the same in Half-Blood and I have to admit I was a bit disappointed by that. I'm hoping that this series will really come into it's own in future books but I couldn't stop myself from making comparisons while I was reading this and that did reduce my rating for the story a little.

Having said that I do still think Half-Blood is worth reading and I am looking forward to continuing the series. I like the characters and I think the mythology has a lot of potential to become something that stands out on it's own merit rather than as a duplicate of the other series. Alex can come across as impulsive and she does make a lot of stupid decisions which could be irritating at times but she does improve in the second half of the book and I think she's a character who has a lot of room for growth. If we get to see her continue to grow up and learn to hold her attitude in check then I think I'm going to end up really liking her.

I definitely liked Aiden, Dimitri (from VA) is still one of my favourite YA heroes and Aiden didn't quite manage to knock him off the top spot but he's definitely not a bad alternative to spend some time with! I'm also really curious about Seth, I'm interested in the abilities he has and think he's going to be a fun character to have around. Seth seems to be the main deviation from the VA storyline and if his character continues to have a major role I'm sure that will help this series stand on it's own two feet. That, along with the mythology, is what really makes me want to read Pure and I'm keeping my fingers crossed that this series will go from strength to strength. If you've been missing the VA world and looking for a new alternative then this series would be a good one to try but I do think that some people will be put off by the huge number of similarities. This didn't bother me as much as it could have because it's been 4 years since I read VA but considering how many things I noticed I think people who read it more recently will probably be able to spot even more. If you haven't read VA yet then I think I'd probably tell you to read that series first though since it is still hands down my favourite YA series.