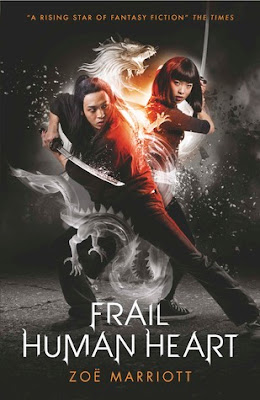 Mio has finally succeeded in banishing the Goddess of Death's plague spreading monsters - but only by making the most terrible sacrifice. Emotionally devastated, Mio isn't sure she has the strength to fight on and risk losing someone else she loves.

But she has no choice. With the final battle in the war between gods drawing closer and all hell literally breaking loose in London, the only things standing between the mortal world and an apocalypse are Mio and her sword.

Don't miss the final instalment in The Name of the Blade series.

The Name of the Blade Trilogy:
The Night Itself
Darkness Hidden
Frail Human Heart

Review:
It's no secret that I love Zoe Marriott's writing, I've been a fan of hers ever since I picked up Shadows on the Moon (which is still my favourite of her books and one I would HIGHLY recommend if you haven't already read it!) and her Name of the Blade trilogy has been outstanding. I'm always a little wary of trilogies because more often than not at least one of the books ends up being a disappointment but I knew that wouldn't be the case here and I'm happy to report that Frail Human Heart ends the series on the biggest possible high.

I think all readers were probably left reeling at the end of Darkness Hidden (well I know I was!) so it's been a long wait for this book. Mio paid the ultimate price for saving the world and I was absolutely heartbroken right alongside her. Now she's grief stricken and terrified of losing anyone else that she cares about, she knows that she has to stop Izanami but she's worried about the upcoming battle and doesn't think she'll survive it. Luckily her friends and family aren't going to let her face her enemies alone, it was great to see how everyone had Mio's back and I loved that they all have a role to play in what is happening.

I really don't want to say much about the plot but you should be prepared for epic battles, terrifying monsters, heartbreak and grief but also the strong bonds of love between friends and family. Zoe Marriott is an expert when it comes to Japanese mythology and I've loved the variety of creatures she has introduced us to from the friendly kitsune like Hikaru to the horrifying Jorogumo and many more in between. I have to also give a shout out to the side characters because they've all been fantastic and I particularly loved some certain developments in Jack's love life but I'm not going to say more about that for fear of spoilers. Frail Human Heart was an absolutely fantastic conclusion to this trilogy and I'm sure fans are going to love it just as much as I did.