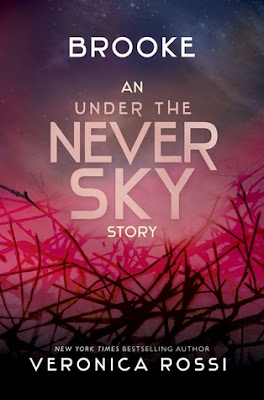 Set just before the events of Into the Still Blue, the conclusion to Veronica Rossi's Under the Never Sky trilogy, this breathtaking novella is a satisfying stand-alone for new readers as well as an exciting glimpse at favorite characters from the trilogy. Pulsing with romance and danger, Brooke will leave readers desperate for the conclusion to this epic and unforgettable saga.

The only fight she can't win is the one for Perry's heart. Following the stunning climax in Through the Ever Night, the Tides have been forced to seek shelter from the Aether storms in a dismal, secluded cave. But Brooke's memories of the cave go back much further, to when she and Perry used to come here together. That was before Perry fell in love with Aria and before Vale's dealings with the Dwellers altered the course of the Tides forever.

Now, with her sister back from a haunting year in captivity and Aria lying unconscious in the sick bay, Brooke struggles to put the pieces of her life back together. Without Perry, who is she? And what is her role in this frightening new world? As these questions swirl about her, an old threat to the Tides resurfaces, and Brooke is forced to put the lives of her people before her own. But in taking this step outside of herself, Brooke may finally discover what she truly wants.

Review:
The events in this novella occur between Through the Ever Night and Into the Still Blue but I don't think it's essential to read this story if you don't want to. It does give a little insight into what's happening with Perry and Aria and it does resolve a plot thread with a certain group but it was mainly Brooke moaning and feeling sorry for herself.

I've never particularly been a fan of Brooke's but I didn't dislike her either, she was Perry's ex girlfriend but I never felt there was a chance of her coming between Perry and Aria even though she obviously wanted to. I have to admit I did feel a little sorry for her but it's not like Perry ever lead her on or made promises that he didn't keep. She knew all along that he didn't love her and she pushed him into a relationship that she knew he didn't want but I guess that doesn't make her heartache any less and I expect most of us have been in a similar position to Brooke at some point.

Although I could relate to Brooke's feelings I just didn't find myself enjoying spending time in her head, she is so obsessed with Perry and if I'm honest I found it boring listening to her constant complaining about pretty much everything. Add in the fact that when finally she decides to move on she jumps back and forth between two brothers and I just found myself rolling my eyes at her behaviour. Do all girls in YA have to have a boyfriend to feel good about themselves? Okay Brooke finally makes a good decision at the end but unfortunately it was too little too late for me.

Unlike the previous novella, Roar and Liv, I didn't really think this had much to add to the series and I ended up being disappointed with Brooke's story. It's definitely one I'll be skipping on any future rereads of the series.