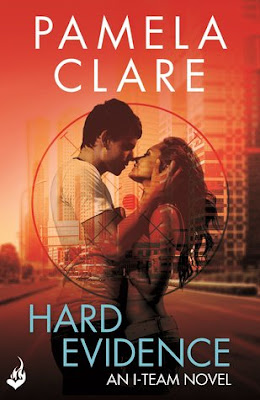 After the murder of a teenage girl, investigative reporter Tessa Novak has her sights set on the mysterious man seen lurking near the crime scene as the culprit.

The man was Julian Darcangelo, an undercover FBI agent, closing in on the trail of a human trafficker and killer. Tessa's accusations could blow his cover, and he wants her off the case.

But just as Tessa has made Julian a target of interest, she is now a target of the killer. And, as they are forced to trust each other, their physical attraction escalates as intensely as the threat from a ruthless murderer who wants to see both of them dead . . .

Review:
When investigative reporter Tessa Novak witnesses a young girl being gunned down in a drive by shooting she becomes determined to find out what happened to her. Her investigation leads her to Julian Darcangelo, an undercover FBI agent, who she initially suspects of being the young girl's murderer. The last thing Julian needs is a reporter drawing attention to him, he has been working for years to bring down a ring of human traffickers and he's closer than ever to getting justice for their victims. It's not only a case of keeping Tessa quiet though, he also needs to keep her safe now that she's drawn attention from the dangerous gang who will think nothing of destroying as many lives as it takes to keep the money rolling in.

Hard Evidence is the second book in Pamela Clare's I-Team series and I enjoyed it even more than the first. This is a fantastically written series with great characters, intense story lines, incredible action and steamy romance. I love how realistic these characters are, witnessing the shooting has a lasting effect on Tessa, not only does it make her realise how precious life is but it also brings out her protective instincts. It may be too late for the girl who was killed but she wants to get answers for her family and she wants to make sure the same thing doesn't happen to someone else. She's incredibly brave to keep looking for answers even when it becomes clear that she is attracting dangerous attention but she isn't stupid and she knows when she needs to ask for help. I loved how courageous Tessa was and I liked that she had a strict code of morals that she wouldn't cross, even to get a story, which is something that can't be said for her boss.

Julian has spent years working this case, his dedication has cost him everything and it's all he can focus on. Good men died fighting this gang and Julian will do whatever it takes to bring them down permanently. The last thing he needs is a reporter getting in the way but Tessa brings out all his protective instincts and he has to keep her safe, it's not easy for him to trust her though and he worries that anything he tells her will turn up printed in the next day's newspaper. Although the two of them are instantly attracted to each other I was pleased that it took time for them to learn to trust each other and to start working together. Julian was very secretive and broody but he's also quite sweet when he wants to be and he was definitely sexy as hell.

I think one of the things I love most about this series is how much insight it gives into some horrific crimes, Pamela Clare does a great job of showcasing how human trafficking victims are treated in this instalment and it's not always comfortable reading. It never feels gratuitous but it's definitely a learning curve and it shows how important it is that we have people like Julian and Tessa out there putting their lives at risk to stop the bad guys. As much as parts of the story are quite dark this series still contains a lot of humour which helps to lighten the mood. The reporters on the I-Team all have a great bond and I loved seeing their interactions, they were protective and caring but also very nosey and enjoy snooping on each other. I also thought the blend of romance and suspense was pretty much perfect, we get a whole heap of action but the relationship development was satisfying too. This is quickly becoming a favourite series and I can't wait to start the next book.