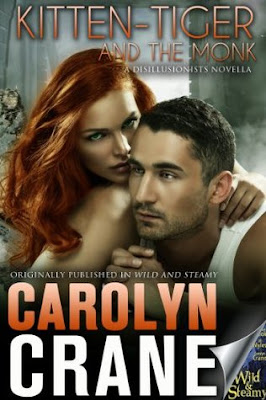 A stand-alone novella from the world of the Disillusionists! (2.5 in chronological order)

Sophia Sidway, Midcity’s most dangerous memory revisionist, seeks out the mysterious Monk in the wasteland beneath the Tangle turnpike. She's hoping for redemption…but it turns out that the Monk is not very pious at all...and there is something very strange about that turnpike.

Review:
Kitten-Tiger and the Monk is a novella set in the world of the Disillusionists, it fits into the series timeline between Double Cross and Head Rush and features memory revisionist Sophia as the main character. The novella was originally included in the Wild & Steamy anthology and is now available as a separate ebook.

It's probably no surprise if I tell you that Sophia has never been one of my favourite characters, especially to anyone who saw her actions at the end of Double Cross. I have to admit I wasn't sure whether to even read this novella but my series OCD insists on reading stories in order and I couldn't quite bring myself to skip it. To be honest I think I could have happily skipped this completely if it hadn't been for the introduction of a new HighCap character, Robert, but as it goes I liked him enough that this novella wasn't a complete waste of time.

Sophia is a powerful memory revisionist but she is ashamed of her actions and wants to change so she goes in search of the Monk, one of the most dangerous members of Packard's team, in the hope that he will disillusion her. Her journey to find the Monk brings her back in contact with her childhood sweetheart, the man she betrayed and abandoned but also the man she never forgot.

I had several issues with this novella, the main one being Sophia's wish to be disillusioned. Surely if she realises her actions have been misguided she should suck it up, apologise and try to make things right with her victims? It's a simple matter of choosing to do the right thing and I lost all respect for her because she wants someone else to make changing her behaviour easy for her. Basically I see it as her yet again taking the easy way out and it made me dislike her even more than I did at the end of Double Cross (which took some doing I can tell you!).

Robert was actually a really sweet guy but considering the way Sophia had treated him in the past I found it pretty hard to believe that he would ever be able to forgive her. I actually ended up feeling sorry for him that he got stuck with such a bitch for a girlfriend! He deserves so much better and I'd much rather have seen him with someone nice like Shelby. The best part of this novella, for me, was seeing someone with the same kind of abilities as Otto but who used them in such a different way. It was an interesting contrast and I'm hoping we get to see more of Robert in the final book, Head Rush.