Review: Through the Ever Night - Veronica Rossi 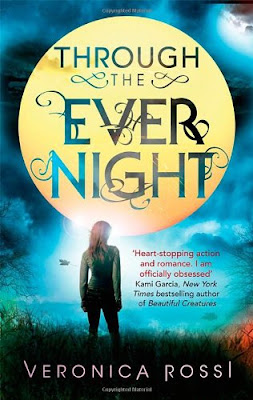 Worlds kept them apart. Destiny brought them together.

Aria has struggled to build a life for herself outside Reverie. It hasn't been easy adjusting to life in the wilderness, but the struggle has been worth it with Perry by her side.

But Perry has other challenges. His people are looking to him for answers. Answers about what happened to his nephew, and what's happening to their world. And they don't trust the privileged Aria, one of the enemy, in her midst.

Review:
After really enjoying Under the Never Sky I was excited to continue reading about Aria and Perry's journey in Through the Ever Night. This story picks up immediately after the last one ended and I was thrilled to see Aria and Perry reunited. Of course, that doesn't mean things are going to be easy for them as a couple. In fact, they're going to have to face a lot of adversity, especially from the rest of Perry's tribe, when he tries to bring Aria home with him.

For me this series is all about the characters, we've seen them both grow up a lot since the beginning and I'm loving the people they have become. Perry has taken full responsibility for his tribe, it's something that sits heavily on his shoulders but he will do whatever is necessary to protect his people. He isn't perfect and makes some pretty major mistakes but you always know his heart is in the right place and it's very difficult to fault him because of that. I love that he isn't afraid to ask for advice from people with more experience than him but that he still trusts his instincts even when it means making difficult decisions. There was a moment towards the middle of the book where he had me worried but I should have trusted Veronica Rossi and I was pleased with the way things worked out in the end.

Aria has also come a long way since the beginning of the series, she is much more confident in her abilities and has come to accept who and what she is. She has worked hard training with both Perry and Roar and is very much a survivor but also someone who is willing to fight for what she believes in. She has Perry's back but she doesn't want to make life more difficult for him and when the rest of the tribe turn against her she makes the hard choice because she knows that Perry won't be able to. As much as I adore Aria and Perry as a couple I also absolutely love the friendship between her and Roar. They have become almost like brother and sister and I love seeing how close they are and how they are always there for each other. It isn't often that we see true boy / girl friendships in YA, especially ones where there isn't even a hint of romance between them and I think that just makes what Aria and Roar have even more special. I love that the author hasn't introduced a love triangle here, that's such an overused trope so it's great to see someone go against the grain.

I don't want to say too much about what happens in this story but there are some surprising twists that you definitely won't see coming. We get to catch up with some of my favourite side characters from the first book (Cinder and Marron in particular) as well as spend time with some new faces. There are shocking and absolutely heartbreaking moments (that I'm still hoping will be resolved in the final book!) as well as some really sweet and emotional scenes. I'm just loving this series and can't wait to see how Veronica Rossi ties everything together in Into the Still Blue.