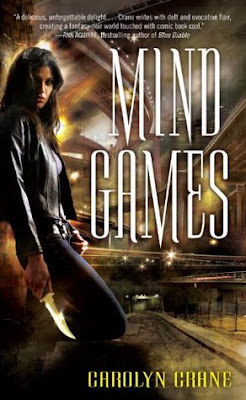 Justine Jones has a secret. A hardcore hypochondriac, she's convinced a blood vessel is about to burst in her brain. Then, out of the blue, a startlingly handsome man named Packard peers into Justine's soul and invites her to join his private crime-fighting team. It's a once-in-a-lifetime deal. With a little of Packard's hands-on training, Justine can weaponize her neurosis, turning it outward on Midcity's worst criminals, and finally get the freedom from fear she's always craved. End of problem.

Or is it? In Midcity, a dashing police chief is fighting a unique breed of outlaw with more than human powers. And while Justine's first missions, including one against a nymphomaniac husband-killer, are thrilling successes, there is more to Packard than meets the eye. Soon, while battling her attraction to two very different men, Justine is plunging deeper into a world of wizardry, eroticism, and cosmic secrets, With Packard's help, Justine has freed herself from her madness - only to discover a reality more frightening than anyone's worst fears.

Review:
Mind Games is the first book in Carolyn Crane's Disillusionists trilogy and I have to give props to the author for coming up with such a unique concept. The Disillusionists are a great group of anti-heroes, they all have unique abilities and together they have formed a psychic hit squad who take down the bad guys by fundamentally changing them on a psychic level. They can take your fears and insecurities and ramp them up to turn you into a complete basket case and the results are quite surprising. I still think this is a moral grey area and I'm not convinced that the punishment is always enough considering the crimes committed by some of the people they go after but it was an incredibly interesting idea and I really enjoyed seeing the team put it into practice.

Justine is the newest member of the group, a self confessed hypochondriac she is more than a little obsessed with her impending death. She is convinced that she is about to have a brain aneurysm and that fear effects everything about her day to day life, she is always on the edge of terror and she suffers with frequent panic attacks. People she meets are very understanding in the beginning but constant trips to the emergency room quickly start to wear thin and she struggles to build lasting relationships. When Packard offers Justine the chance at a normal life she is sceptical but grabs it with both hands. Packard teaches Justine to channel her fears into other people and for the first time in years she knows what it is like to not be afraid. Unfortunately, there are consequences to using her abilities that Packard didn't bother to explain upfront and she now finds herself in a very difficult position.

I loved how different Justine is to normal UF heroines, she is a completely crazy in a lot of ways and it was actually kind of hilarious watching her fears spiral out of control as an attack came on. I was surprised at how easy it was to relate to her worries but I think we've all had that moment when we're convinced something is going awfully wrong with our bodies, luckily I don't have the same fears as Justine though because that's just a recipe for madness. I enjoyed the interactions between Justine and the rest of the group, the side characters were all really interesting and I'm looking forward to getting to know them better. It was nice to see a positive female friendship between Justine and Shelby but I think my favourite character was Packard. You know from quite early on that he's keeping secrets and I didn't always agree with the choices he made but I loved him anyway and I really liked the chemistry between him and Justine. I'm definitely rooting for them as a couple even though things aren't looking positive right now.

I did have a few issues with the story though, as much as I liked Justine in the beginning I have to admit that she had started to get on my nerves by the end of the book. It wasn't just her neurosis that irritated me but her attitude to men and relationships, I didn't understand her obsession with her ex-boyfriend Cubby (ridiculous name by the way!) and I thought they were a really ill suited couple so her constantly talking about him was overkill. There was also a particular scene with one of their targets that initially seemed to come out of nowhere but was then over with just as quickly, I felt it should have left Justine feeling at least a little traumatised but she seemed to forget all about it within a few pages. Then you have the obligatory love triangle and I wasn't impressed with the introduction of Otto. To be honest he just creeped me out from the moment he stepped onto the page and the interactions between them turned my stomach. I was really disappointed with a particular turn the story took and there was one scene that left me feeling more than a little bit sick.

Although there were parts of the story that didn't work for me I'm still curious enough about the Disillusionists that I want to carry on reading the series so I'm planning on picking up the sequel, Double Cross, as soon as I finish writing this review. I have high hopes for the series and am keeping my fingers crossed that things take a turn for the better in the next book.