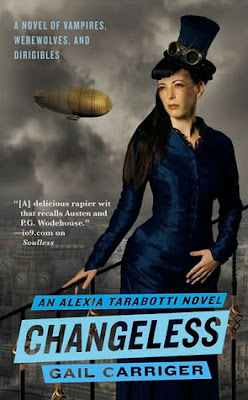 Lady Alexia is rudely awoken in the wee hours of the mid-afternoon to find rather peculiar events transpiring.

Her husband, who should be decently asleep like any normal werewolf, is yelling at the top of his lungs. Then he disappears - leaving her to deal with a regiment of supernatural soldiers encamped on her doorstep, a plethora of exorcised ghosts and an angry Queen Victoria.

But Alexia is armed with her trusty parasol, the latest fashions and an arsenal of biting civility. Even when her investigations take her to Scotland, the backwater of ugly waistcoats, she is prepared - upending werewolf pack dynamics as only the soulless can.

Review:
Changeless picks up Alexia's story several months after the ending of Soulless, she is settling into both her new role as a member of Queen Victoria's Shadow Council and her life as a married woman. She is madly in love with her husband and things between her and Conall couldn't be better, all in all life should be much more straightforward now. Unfortunately, things never stay on an even keel for too long and when a strange blight starts to effect the entire supernatural community in London it is up to Alexia to find answers. When Conall is called back to Scotland on urgent family business Alexia isn't too worried but it doesn't take long for her suspicions to be raised and for her to realise that her husband might need her assistance. Never one to be left behind Alexia packs up her entourage and boards a dirigible to follow him.

After loving Soulless I was really looking forward to spending more time in this world and getting to know the characters better. I just love Alexia, she is a very witty and observant narrator and she doesn't let anyone pull the wool over her eyes. I have to admit I was a bit disappointed that Conall was absent from so much of this story, they are separated for a large portion of the book which is a shame because they work so well together. Conall actually irritated me a bit here because he spent the first part of the book avoiding her and refusing to answer her questions then his actions at the end of the story made me want to punch him. I still have hope that they'll work things out but he is really going to have to do some grovelling to make me love him as much as I did in the first book.

We get to see some familiar faces from the previous book, Alexia's friend Ivy plays quite a large part and she is always amusing to read about and you also have one of Alexia's irritating younger sisters tagging along for the ride. I actually read the first three books in Gail Carriger's Finishing School series before starting Changeless so it was great to see Sidheag make an appearance but I have to admit a certain part of her story line broke my heart a little and I was surprised at how laid back she was over everything. It was fun to see her all grown up though and she has definitely come into her own spending the last 20 or so years with her pack in Scotland. There are a few other familiar faces from the previous book but I loved the addition of the French inventor Madame Lefoux, she is a fab character and I hope we get to see more of her.

I'm going to warn you now that Changeless ends on quite a cliffhanger and will have you desperate to get started on the sequel, Blameless. I was disappointed with the way things ended and I hope it doesn't take too long for Conall to come to his senses in the next book. Overall I'm really enjoying this series though and I can't wait to see where the journey takes me.