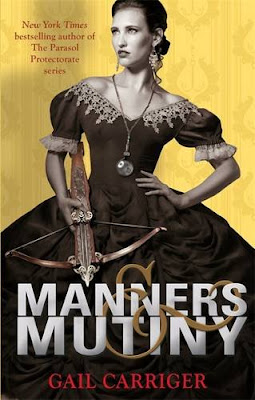 Are you ready to graduate from Finishing School?

Espionage lessons aboard Mademoiselle Geraldine's floating dirigible have become tedious without Sophronia's sweet sootie Soap nearby. She would much rather be using her skills to thwart the dastardly Picklemen, yet her concerns about their wicked intentions are ignored, and now she's not sure whom to trust. What does the brusque werewolf dewan know? On whose side is the fashionable vampire Lord Akeldama? Only one thing is certain: a large-scale plot is under way, and when it comes to fruition, Sophronia must be ready to save her friends, her school, and all of London from disaster - in a decidedly dramatic fashion, of course.

What will become of our proper young heroine when she puts her years of training to the test? Find out in this highly anticipated and thrilling conclusion to the New York Times bestselling Finishing School series!

Review:
As Sophronia and her friends get closer to the end of their time at Finishing School they have one last challenge to face before they can graduate - stopping the latest dastardly plot by the Picklemen. It's obvious that they have something major planned but the teachers aren't listening to them and Sophronia isn't sure who else to trust so she's just going to have to figure things out on her own.

As sad as I am to reach the end of this series I'm happy to say that it ended on a high note. Gail Carriger did a brilliant job of tying up all the loose ends and creating a fitting finale for Sophronia's story. She has her work cut out when the Picklemen invade her school, just what are they up to and why do they need the school dirigible to carry out their plan? Along with Agatha and Dimity she needs to get to the bottom of things quickly, especially if they want to graduate on time.

We also saw her bargain with her future to save Soap's life at the end of the last book and her actions have lasting consequences for both of them. Now that Soap is a werewolf he is more determined to pursue Sophronia than ever and she's finding him incredibly hard to resist but there is no way they would ever be accepted by society as a couple so they have to decide just how much they are willing to risk to be together.

Manners and Mutiny is an action packed finale to the series and I enjoyed every minute of it. These books have just been so much fun to read and I've really spotting links to characters in the Parasol Protectorate series. Gail Carriger has put so much effort into fully fleshing out the world and building a full history that it's brilliant to see how it all ties together, sometimes in unexpected ways. I really would like to see more of Sophronia and Soap so I hope that the author decides to revisit them in the future and share some of their adventures, I'm sure they'll have a lot of fun in their new roles, but in the meantime I'll happily be diving into her other spin off series and tie ins.