Review: The Moth and the Flame - Renee Ahdieh 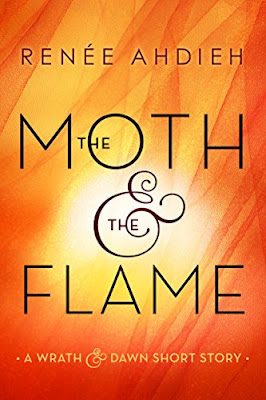 It started as playful, if barbed, banter before rising to a fateful wager with a most notorious rake—the Captain of the Guard, Jalal al-Khoury—who may have finally met his match in a lovely, if haughty, handmaiden, Despina. But she, too, seems to have met her match in the handsome Jalal. What begins as a tempestuous battle of will and wit in short order becomes a passionate affair spurred on by tragedy of the worst kind.

Review:
Although this short story is technically set before the start of The Wrath and the Dawn I'd actually say it's probably better to read it after the book because you'll already be familiar with the characters involved. I don't think I'd have enjoyed this so much if I'd read it as a prequel so I'm glad read it later on.

It was really nice to get to know Despina a little better and see the beginning of her romance with Jalal. He's used to women falling all over him so he's quite taken aback when Despina doesn't seem all that interested, he goes on an all out charm offensive though and it's not hard to see why she finds him impossible to resist.

It was interesting to see Despina's take on Khalid and his first bride too, I expected to feel really sorry for Ava and I did to a certain extent but at the same time I can't help thinking that she caused an awful lot of trouble over something that's really quite stupid. Khalid had never lied to her or led her on, they had a marriage of convenience (something quite common historically, especially amongst royals) so yes I'm sure she wanted him to love her but under the circumstances I think she was expecting a little too much too soon and her actions were ultimately selfish ones that had disastrous consequences.

My one complaint about this story was that it was too short but I'm hoping we'll see much more of Despina and Jalal in The Rose and the Dagger and I'm really looking forward to continuing the series.