In every generation on the island of Fennbirn a set of triplets is born: thee queens, all equal heirs to the crown, all possessed of a coveted magic.

Mirabella, a fierce elemental, can spark hungry flames with the click of a finger.

Katharine, a poisoner, is known to be resistant to the deadliest of snake bites.

Arsinoe, a naturalist, is rumoured to have the ability to bloom the reddest of roses.

But becoming the Queen Crowned is not just a matter of royal birth. These three sisters must fight to the death for the throne, and on the night they turn sixteen the battle begins. Only one queen can inherit the crown.

Review:
As soon as I read the blurb for this story I wanted to read it. Triplet princesses with magical powers who have to fight each other to the death in order to claim the crown? Yup, sign me up! I was expecting a fast paced story full of action packed battles and bitter enmity between the sisters but that's not really what I got. This book is more of an introduction, there are a lot of characters to meet and a whole world to get used to so the action doesn't really start until right towards the end and I imagine the story I was expecting here will be what we'll actually get in the sequel.

In spite of the slower than expected pace I still quite enjoyed getting to know the three sisters. Arsinoe is probably my favourite, she is the naturalist queen and as such she should have the ability to influence plants and control an animal familiar but unfortunately her powers are weak and she hasn't even bonded a familiar yet. Her best friend Jules is one of the most powerful naturalists the island has seen in centuries so Arsinoe's lack is even more glaring in comparison. I absolutely loved the friendship between the two girls though, they never let the difference in their abilities come between them and Jules was incredibly supportive and protective over Arsinoe. I think Jules (and her familiar Camden) actually ended up stealing the spotlight in quite a few of the scenes, there was a really sweet romance between her and Joseph that I had been enjoying every minute of until a certain thing happened that I just found incredibly disappointing and very out of place.

My second favourite sister was Katharine, she is a poisoner and should be immune to all kinds of poisons but her ability is also incredibly weak. The family who raised her have spent years trying to build her immunity by poisoning her on a daily basis and it has left her smaller and weaker than her sisters so she's not expecting to have much of a chance when the fighting starts. I felt really sorry for Katharine, she's quite innocent and naive considering she's constantly being tortured with different poisons and I really wanted to see her stand up for herself a little more. We did see her start to gain confidence though and I'm hoping she'll be much more proactive in the next book.

Mirabelle is the sister with the best control of her powers and is the strongest elemental in a long time. The last few queens have all been poisoners but the temple priestesses are so convinced that Mirabelle will win that they've abandoned all appearance of staying neutral. I liked her character at first, she is the one who has the highest chance of winning but she also seems the most resistant to the idea of killing her sisters, the others are pretty resigned to dying but Mirabelle doesn't want to fight them. She is being manipulated by the priestesses but she quite often sees through what is going on and she isn't a pushover which I appreciated. Unfortunately she is also involved in the most ridiculous love triangle of all time, one full of insta-love and some scenes that were just completely cringeworthy. I lost all respect for her character because of that triangle and it meant I stopped enjoying the chapters from her perspective and it's a big part of why she's my least favourite sister.

Based on the premise and the characters I should have loved this book but I've been left with so many questions and there are a lot of things about the world building that just don't make sense. The queen only rules until she gives birth to the next set of triplets and at that point she is banished from the island to the mainland. Why? What is the point of that? Especially when the triplets are raised in isolation for the first six years and then they're separated to live with the clans that share their abilities. It's not until the triplets are sixteen that they are allowed to start fighting for the crown and able to go claim the throne so you have at least sixteen years where there is no ruling queen on the island which just doesn't make sense. It's also not really explained why only one of the triplets is allowed to live, why doesn't the most powerful just automatically take the throne? They could banish the other two to the mainland to get rid of them but I don't see why they need to die. I had lots of other questions but this review is already long enough so I'm not going to list them all.

I'm hoping I'll get some of those answers and a lot more action in the next book because I definitely do want to know what is going to happen to these characters. This book isn't perfect but I did find it a very easy read and there were a lot of things I enjoyed about it so I have high hopes for the series as a whole.

Source: Received from Macmillan in exchange for an honest review. 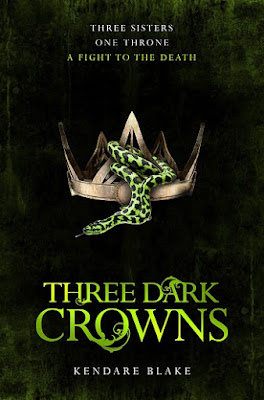 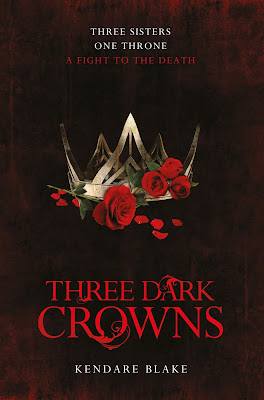