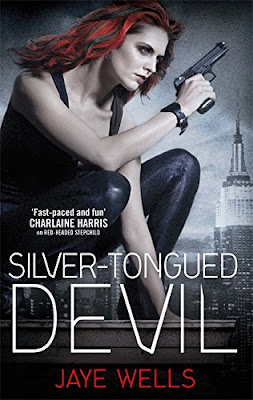 Life is looking up for Sabina Kane. The threat of war between the dark races seems to have passed, and her magic training is also progressing well - just like her relationship with the sexy mage Adam Lazarus. But as much as Sabina feels hopeful about the future, she doesn't quite trust that peace is possible . . .

Her suspicions are confirmed when a string of sadistic murders threaten to stall peace talks between the vampires and the mages. Sabina pitches in to find the killer, but this dark investigation soon has her questioning everyone she thought she could trust. And the closer she gets to the killer, the more Sabina begins to suspect this is one foe she may not be able to kill.

Review:
Having finally got rid of her grandmother you'd think that Sabina's life would be a lot easier now and to some extent it has been. Things are going well with Adam but she's struggling to control her vampire side and fit in with the mages, she still isn't completely accepted no matter what she's done to prove that she's on their side. It doesn't help that she's still finding it hard to use her mage powers and the one person she should be able to relate to the most, her twin sister Maisie, is fighting off her own demons. Maisie was broken by their grandmother and is pushing everyone away, Sabina blames herself for what happened to her sister and is desperate to find a way to help her but it's very hard to help someone who doesn't want to admit that they're in trouble.

Silver-Tongued Devil was slower than the previous books in the series, there is still a mystery for Sabina to solve thanks to a string of brutal murders that are being committed but there is definitely less action and more drama and if I'm honest I was a little disappointed by that. I don't mind drama if it serves some kind of purpose to develop the storyline or to teach the characters something but in Sabina's case it just felt manufactured. I knew the moment she slept with Slade and kept it secret from Adam that it would come back to bite her and now is the time for her to pay the price. It's not that she cheated on Adam because they weren't even a couple when it happened but he's understandably hurt by the fact that she kept things hidden from him, I do think he took it a little too far though and that dragged things out more than necessary. It probably wouldn't have been so irritating if we didn't have two other couples also having their own dramas going on at the same time, I expect that kind of thing if I'm reading a contemporary romance but it's not what I'm hoping for when I read urban fantasy.

So the middle of the book was a bit bogged down with multiple relationship woes but the beginning and the last third of the book made up for it. I'm not going to talk about what actually happened but you can tell that Jaye Wells was really ramping things up ready for the final book and I'm hoping that Blue-Blooded Vamp is going to be action from start to finish. Everything is all starting to come together and I can't wait to see how it all plays out.