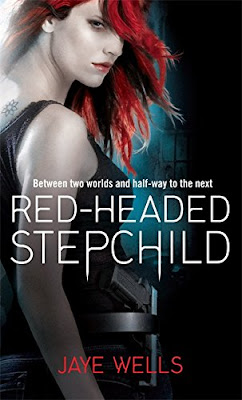 In a world where being of mixed-blood is a major liability, Sabina doesn't really fit in. And being an assassin - the only profession fit for an outcast - doesn't help matters. But she's never brought her work home. Until now.

Her latest mission is uncomfortably complex, and threatens the fragile peace between the vampire and mage races. As Sabina scrambles to figure out which side she's on, she uncovers a tangled political web, some nasty facts about her family and some unexpected new talents. Any of these things could be worryingly life-changing, but together, they could be fatal . . .

Review:
Sabina Kane has always been an outcast thanks to her mixed blood heritage, as a half-vampire/half-mage she is seen by most as an abomination. Abandoned by the mage side of her family as a baby she was raised by her grandmother, a member of the Dominae (the ruling council of the vampires). Sabina has never been able to fully live up to her grandmother's expectations of her, and the vampires are able to find fault in pretty much everything she does but they are the only family she has ever known and she is completely loyal to them.

Although Sabina usually works as an assassin her latest task is much more dangerous and it's not going to be an easy one to pull off. Sabina must convince the entire supernatural community that she has broken ties with the Dominae and go undercover with the enemy to try and uncover his plans. That would be hard enough if she wasn't being stalked by a mage who wants to train her to use her magic and introduce her to the other side of her family but Adam adds a whole new set of complications. Sabina has been raised to hate mages and she doesn't find it easy to trust but the more she uncovers about her past the more she starts to realise that the Dominae, and her grandmother, have been keeping a few too many secrets from her. She is forced to question everything she's ever been told but how can she decide which path she should take from now onwards?

I've seen mixed reviews for Red-Headed Stepchild but I thought it was a great introduction to the Sabina Kane series and it definitely left me wanting to know more. Sabina isn't always the easiest character to get along with, she's spent years being brainwashed by the vampires and even when certain things are staring her in the face she is very quick to try and justify her grandmother's actions. I can't say I blame her for that though, the vampires are the only family she has ever had and no matter how badly they treat her they are still the only ones who have ever been there for her. She may be stubborn but she's not stupid and even though it takes a while she does start to put all the pieces together later on in the story. Once she's made a decision about the right thing to do she is determined to see things through no matter what it costs her.

Although I liked Sabina I have to admit it was the side characters who really stole the show in this book. My favourite was her demon sidekick Giguhl who added a lot of humour to the story and constantly made me laugh while I was reading. I also really liked Adam, the mage who has come searching for Sabina. It took me a while to decide he could be trusted but I liked the chemistry between him and Sabina and I hope we get to see a lot more of them working alongside each other. The world building was done well and I enjoyed finding out about the history of vampires and mages, I still have a few questions but I'm sure it'll all come clear as the series continues. We have a good mix of supernatural characters, alongside the vamps and mages you also have demons, faeries and nymphs but I wouldn't be surprised if there are more species yet to be introduced. Yes this is a fairly standard urban fantasy world but I think the characters are strong enough to pull it through and I'm hooked enough to want to continue reading.