It’s time for the cover reveal of the next Eternal Mates series book, Possessed by a Dark Warrior. This is one I know a lot of readers are waiting for, since it stars a certain dark elf called Bleu. Yes, it’s finally time for our gruff moody commander to put his head in the sacred noose…

Here’s more about the next book in the series, due for release on April 9th! 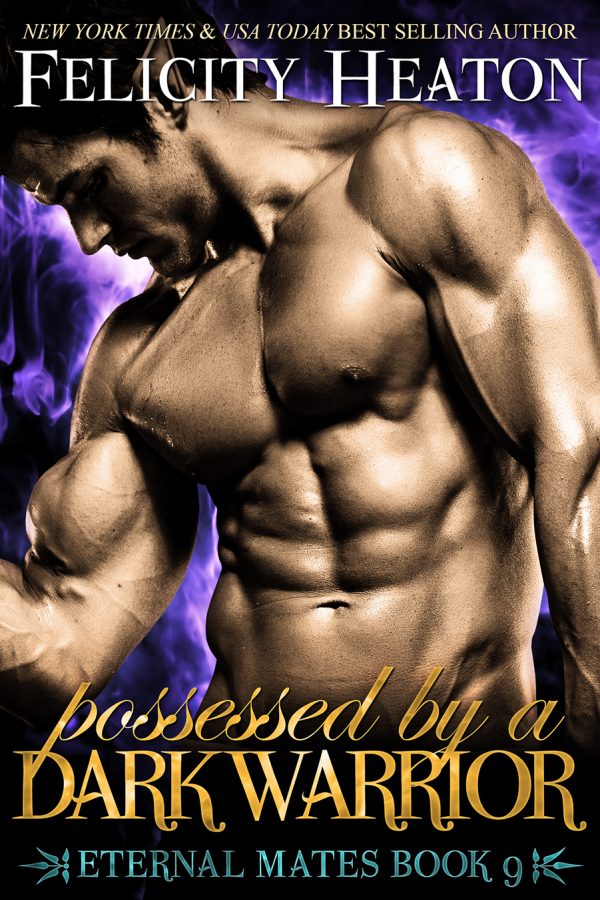 A powerful warrior and commander of the dark elf legions, Bleu is a loyal and devoted male, and one who has never failed in anything—except one thing. Love. When an elusive female dragon shifter surfaces in Hell again, giving him a mission to hurl himself into, he gladly returns to his hunt for her and the deadly blade she stole from his prince seven centuries ago, but as he closes in on his prey, fate reveals she is far more than his enemy.

Having escaped from the black market arena and her life as a slave, Taryn sets her sights back on the task she began seven hundred years ago when her brother stole a precious sword, but in the three centuries she’s been a captive, everything has changed. Corrupted by a craving for power, her brother has become dangerously obsessed with finding the blade and using it to claim the ultimate treasure—the position of King of Hell.

Faced with having to end her beloved twin to stop him from bringing all of Hell to its knees before him, will Taryn be strong enough to use the very blade he seeks against him? And when Bleu finally catches his elusive prey, will he listen to his head as it demands he complete his mission or his heart as it demands he claim his eternal mate?

Pre-order your copy of Possessed by a Dark Warrior today at: http://www.felicityheaton.co.uk/possessed-by-a-dark-warrior-paranormal-romance-novel.php

Possessed by a Dark Warrior is due for release in ebook and paperback on April 9th 2016 and will be available from all major online book retailers.

Join Felicity’s mailing list to receive a notification when Possessed by a Dark Warrior is released, PLUS a sneak preview of the first 4 chapters of the book and chances to win a signed paperback copy: http://www.felicityheaton.co.uk/newsletter.php

Add the book to your Goodreads shelf at: http://www.goodreads.com/book/show/28524669-possessed-by-a-dark-warrior