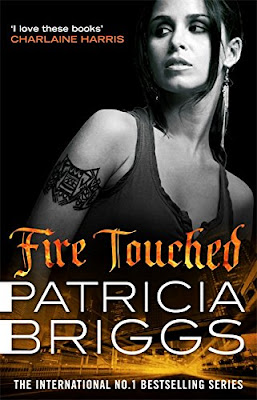 Mercy Thompson is back, and she'll soon discover that when the fae stalk the human world, it's the children who suffer . . .

Tensions between the fae and humans are coming to a head. And when coyote shapeshifter Mercy and her Alpha werewolf mate, Adam, are called upon to stop a rampaging troll, they find themselves with something that could be used to make the fae back down and forestall out-and-out war: a human child stolen long ago by the fae.

Defying the most powerful werewolf in the country, the humans and the fae, Mercy, Adam and their pack choose to protect the boy no matter what the cost. But who will protect them from a boy who is fire touched?

Review:
I reread the entire Mercy Thompson series (and the Alpha & Omega spin off) before the release of Fire Touched so to say I was hyped up for this book is a massive understatement. I absolutely adore this world and all it's characters and I'm incredibly invested in what happens to them so this was right up there among my most longed for books of the year (please, please write faster Patricia Briggs I need more than one book a year from you! LOL).

I love Mercy and Adam as a couple, they are so in sync with each other and always seem to know what the other is thinking. Even when they're under an incredible amount of pressure or have other people trying to get between them they always have each other's backs and they never doubt the feelings they have for each other. Even when Christy is doing her worst Mercy never fears that Adam is going to take his ex-wife back and she actually deals with things a hell of a lot better than I would in her position!

One thing that has been really bugging me for the last few books though is the way so many members of the pack treat Mercy. Yes, I get annoyed at Christy too but she's the jealous ex who has realised what a mistake she made letting Adam go and is angry that he's now happier with someone else than he ever was with her so I understand where she's coming from, I don't agree with it but I do get it. She makes me mad and I'm still waiting for that meteorite to fall out of the sky and squish her but it's the pack members like Mary Jo, Paul and Alec who I REALLY want to punch in the face. They have seen Mercy put her life at risk to protect them time and time again so they should be willing to support her for that alone but even if you completely discount Mercy from the equation they should have enough respect for Adam as their Alpha to put his feelings first. He is so happy with Mercy and that alone should have them fully on board with the relationship or at the very least keeping their mouths shut anyway.

I don't want to say too much and give spoilers but I will say that things with the pack really come to a head in Fire Touched and I absolutely LOVED how it played out. It was so awesome that I reread one chapter about 4 times before I was able to continue with the story. It was one of my favourite moments from the entire series and I wanted to give several characters a standing ovation - that's how happy it made me! We do still have Christy to deal with but she's a whole other ball game and I now have high hopes that things will be resolved with her sooner rather than later (I'm totally willing to hire a bus and just run her over if that gets her out of the way faster!).

Fire Touched has everything you could wish for: rampaging trolls, a human child who spent so long living in Underhill that they now have some very interesting abilities, exciting changes and developments within the pack (ones that will have huge implications as the series continues), comedy moments that will make you snort with laughter, emotional scenes that will make your heart melt, edge of your seat action and brilliant friendships. There is a reason that this series remains a favourite and that is entirely down to the skill of Patricia Briggs at creating believable characters that readers want to spend time with, characters you'd want to have at your back in a fight but would also invite around for a barbecue afterwards because they're such great friends. I will never get enough of this series and I'm already thinking perhaps it's time to start yet another reread while I wait a year for the next book to release!