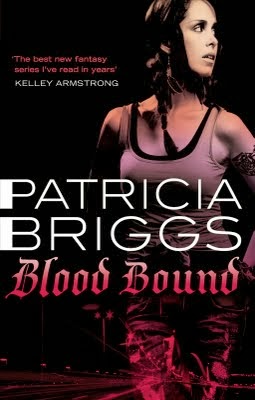 Like most people who own their own business, I work long hours that start early in the morning.  So when someone calls me in the middle of the night, they'd better be dying...

Mercy Thompson; woken at 3am by a vampire. Stefan also happens to be a friend, and he needs her help. He has to deliver a message to a fellow undead and needs a witness that won't be noticed - and Mercy's shapeshifting abilities make her the perfect candidate.

But the assignment turns into a bloodbath and Mercy attracts the attention of not just a powerful vampire, but the even more powerful demon possessing him.  She can count on the supernatural community for protection - and alpha werewolf Adam would like her to rely on him in other ways, too - but when it comes to being proactive, she's on her own.

Review:
Blood Bound continues the story about 6 months after the events of Moon Called.  The werewolves have started to come out to the public, like the fae before them but the vampires are still keeping their existence a secret.  When Mercy is woken by a phone call in the middle of the night from her vampire friend Stefan she isn't happy but Stefan needs a favor and as Mercy owes him one she agrees to help.  There is a new vampire in the area who has raised Stefan's suspicion and he wants Mercy to be an impartial witness to the events by attending the meeting in her coyote form.  It sounds like an easy way for Mercy to return the favor she owes Stefan but she should have realised things are never simple when it comes to vampires.

I really enjoyed Moon Called but I thought that Blood Bound really stepped things up a gear.  The first book focused more on the werewolves and setting the scene for the world Patricia Briggs has created.  This book concentrates more on the vampires but because most of the characters are already established it gets to focus much more on the story.  We get to learn more about Mercy's unique abilities as a Walker, abilities that are going to come in very handy in this book.

Mercy has to show a lot of strength to face her enemies in Blood Bound, I'm really enjoying watching her character grow and of course you have her 2 werewolf admirers Adam & Samuel still fighting for her attention.  In fact she picks up another unexpected admirer in this book which I think is going to make the rest of the series even more interesting.  Although this book focuses more on the vampires we still get to learn more about the werewolves.  Although Mercy has a lot of allies she has to stand more on her own two feet and she has a major part to play in this installment.  I'm hoping we continue to see her grow as a character throughout the rest of the series.

I'd definitely recommend this series to urban fantasy fans.  Mercy is a likeable heroine with unusual abilities in a genre that tends to focus more on vampires and werewolves (not that I have a problem with vamps & weres but it is nice to come across something a little different).  Patricia Briggs has created a believable world populated with interesting characters and this series really could end up taking you in any direction.  I'm looking forward to reading more about Mercy and her friends.

Other Reviews:
All Booked Up
Chrissie's Corner
If you have reviewed this book on your blog please leave a link to your review in the comments & I'll add the link here.