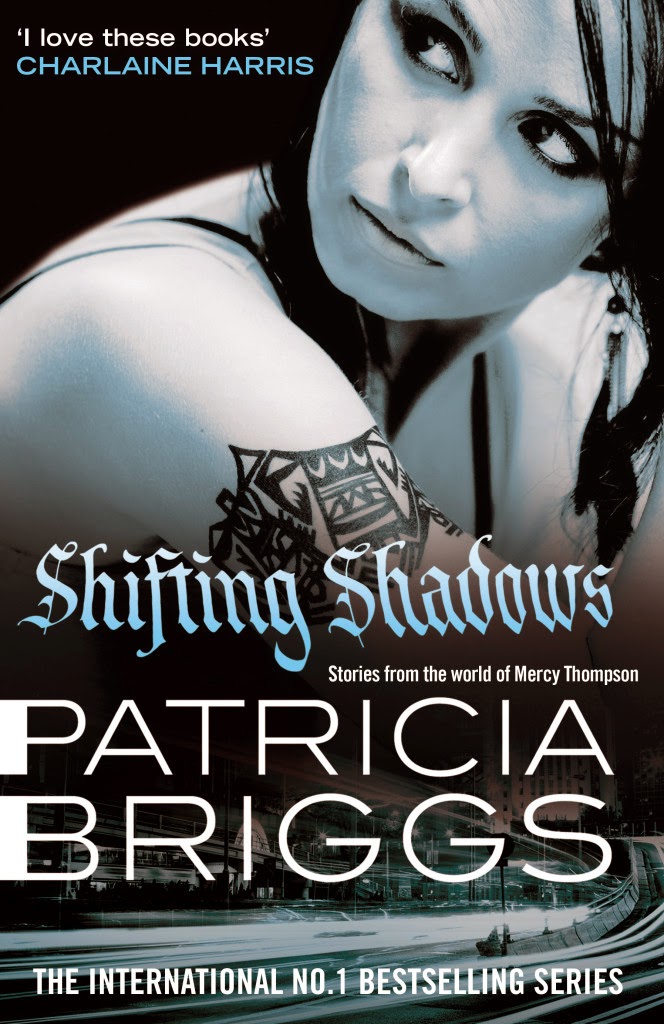 Including a number of original short stories, this stunning collection is set in the world of Mercy Thompson - mechanic, shapeshifter and fighter - and the characters she calls friends.

This highly acclaimed and number one New York Times bestselling series is loved by fans worldwide.

Review:
I'm a huge fan of Patricia Briggs, her Mercy Thompson series is one of my favourites and I just adore the world she has created. One of the best things about these books is the amazing characters, not just the main characters like Mercy and Adam (or Charles and Anna in the Alpha & Omega books) but also all of the secondary characters like Bran, Samuel, Warren, Ben, Asil and many, many more. The scope of this world is literally huge and after 8 full length novels starring Mercy and another 3 in the spin off series I feel like all of these characters are part of my family. I love them all dearly but there were so many characters I am desperate to see more of.

Patricia Briggs has already published short stories and novellas set in this world but they've always been part of multi-author anthologies and I have to admit I've not wanted to spend the money buying the books when I was only interested in the PB stories. Shifting Shadows finally places all six previously published stories in one handy book along with 4 completely brand new ones. The stories have been printed in series order so it is very easy to see where they fit in the timeline with the other books and they all have an introductory note from Patricia Briggs telling us what inspired her to write them and giving us other insights into the characters involved. For someone who has only read 2 of these stories previously this book is absolutely wonderful but even if you've already read them all it is worth buying this book for the new stories alone. I'm going to give a brief overview of each of the stories in the anthology so you'll have to forgive me if this review ends up being quite a long one but I'm hoping you'll find the information useful.

1. Silver - This is one of the new stories and is set hundreds of years before the start of the series. It features Bran, Samuel and Ariana and is quite a bitter sweet story, one that is full of pain and suffering but that is bearable because I've seen how things turn out in the later books in the series. We already know about Bran and Samuel's capture by the witch that was Bran's mother but here we get to see first hand exactly what they both went through when they were turned into werewolves and basically forced into slavery. We also get to see Samuel and Ariana's first meeting and watch them fall in love but if you're up to date with the series you'll know that things don't end well for them at this point. Their story continues in Silver Borne but I thoroughly enjoyed seeing how things started for them even if it did break my heart and bring tears to my eyes more than once!

2. Fairy Gifts - Previously included in the Naked City anthology this story occurs before Moon Called and features introduces us to the vampire Thomas who Mercy first meets in Frost Burned. This story is set in Butte, Montana and starts in 1892 when the town had a busy copper mine. Thomas and his family are immigrants who are operating on the wrong side of the law and Thomas is turned into a vampire against his will. He struggles to deal with what happened to him but finds redemption in a very unlikely place. I enjoyed this story but I have to admit I'd completely forgotten who Thomas was so I never really felt fully connected to him or as invested in his story as I did with the rest of the characters in the anthology.

3. Gray - Previously published in the Home Improvement: Undead Edition anthology this story also takes place before Moon Called and it introduces us to characters that, so far, haven't appeared in the rest of the series. Elyna was kidnapped by vampires and turned by accident 80 years ago leading to a terrible tragedy. Now she has returned to her home and is looking to make up for the sins of her past. This was another bitter sweet story, one that left me feeling more than a little heart broken for Elyna and her husband but that did have a kind of happy ending.

4. Seeing Eye - Published in the Strange Brew anthology this story is also set before Moon Called. If you've read Hunting Ground you'll probably remember the werewolf Tom and his witch mate Moira. I loved the couple previously so I was very excited to get to see their first meeting and watch Tom put his prejudice towards witches to one side to work with Moira to rescue his brother. Patricia Briggs mentioned in her introduction that she's planning to write more about these two in the future which is something I'm really happy about, we haven't seen many good witches in the series yet so I definitely think there is a lot of scope for Moira's character.

5. Alpha and Omega - This story was previously included in the On The Prowl anthology and also published as a stand alone ebook. The events run alongside those in Moon Called so I would recommend reading that novel first so you don't give yourself spoilers. This novella is the introduction to the Alpha and Omega series and is one of the only stories from the anthology that I'd already read. I love Anna and Charles so much and this is a brilliant start to their series. If you haven't read their books yet I'd highly recommend reading this novella before you start Cry Wolf because it gives you so much information on Anna's background and her first meeting with Charles.

6. The Star of David - This short story was first published in the Wolfsbane and Mistletoe anthology and it features Adam's army buddy David who we met in the Mercy series (I'm sorry but I can't remember which book he first appears in). Events in this story happen towards the end of Moon Called but don't really have any bearing on the series so can really be read at any point. This is a nice little Christmas read about finding forgiveness for your sins, David went through a lot when he was changed and it was nice to see him find some kind of peace through his family. It also introduces a young wizard called Devonte who I really hope we might see again in the future when he's grown up and fully come into his powers.

7. Roses in Winter - This is a new story that fits into the time line between Bone Crossed and Silver Borne. It is told from Asil's point of view which I LOVED and features Kara, the young werewolf whose father approached Mercy looking for help in Blood Bound. I've often wondered what happened to Kara after she was sent to live with the Marrok so it was great to see how she was getting on but I was most excited to get to know Asil a bit better. I find his character absolutely fascinating and I really hope he gets his own book (or that we at least get to see him find a HEA) at some point in the future. This story also features quite a few interactions between Asil and Bran which is always a nice bonus and this was definitely one of my favourite stories in the anthology.

8. In Red with Pearls - Previously published in Down These Strange Streets this story fits into the timeline between Silver Borne and River Marked and is told from Warren's point of view. I have loved Warren and Kyle since the beginning so it was fantastic to see a story starring them both, they are such an adorable couple and I would love to read a full length novel about them. This is a fun supernatural mystery that shows Warren in his new role as a private investigator for Kyle's legal firm.

9. Redemption - This new story is set between Frost Burned and Night Broken and is told from Ben's point of view. I wasn't too sure what to make of Ben in the beginning but the way he acted towards Mercy after she was attacked made me fall head over heels for him and I've been desperate to know more about his background ever since. This story shows us Ben at his grumpiest but it also shows us how far he has come since the beginning of the series. We get more of an insight into what happened to him before he left London and we also see him finally starting to heal from those events and letting people get close to him again. He still has a long way to go but that just makes his recovery all the more realistic and I can't wait to see him continue to grow.

10. Hollow - The final story is another new one and it takes place after Night Broken. You can't have a Mercy Thompson anthology without a story told from Mercy's POV and this is a perfect way to end the book. This story is classic Mercy and it shows her once again putting herself in danger to protect virtual strangers. I'm not going to say too much about what happens but I will say that she's going to turn poor Adam's hair gray if she decides to take up ghost hunting full time! I love the interactions between her and Adam in this one, he is so supportive of her even when he wishes she would just walk away rather than put herself in danger. He knows that he'll never change her though and he accepts that and chooses to walk alongside her.

Bonus Outtakes - It was a happy surprise to discover that the anthology also includes two bonus outtakes. The first is set during Silver Borne (between chapters 14 & 15) but told from Ariana's point of view. After reading about Ariana and Samuel's first meeting at the beginning of the book in Silver it was really nice to be reminded how much things have changed for them by the time we reach Silver Borne, this snippet brought tears to my eyes but it also left me with a smile on my face. Finally to end things we have a final outtake from the end of Night Broken told from Adam's point of view. This was only a short chapter but I absolutely loved it! We get to see exactly how much Mercy means to Adam and he always makes my heart melt. I don't think I'll ever get enough of reading his POV so this was a fantastic little snippet.

As you can tell Shifting Shadows is a fabulous anthology that gives us extra insight into some of the most popular characters in the Mercy series. I enjoyed every minute of this book and it left me desperate to start rereading the whole series again from the beginning. If you're a fan of this series then this anthology is a must read!