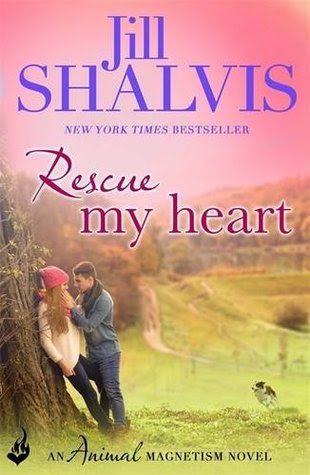 After a tragic stint in the National Guards, Adam Connelly returns to his animal shelter in Sunshine, Idaho, just wanting to be alone. Then he opens the door to the woman whose heart he once broke - still gorgeous, still tough-as-nails, yet this time, unusually vulnerable.

Adam is the last man Holly wants to see. But with her father missing, he is the only one she can count on to find him.

For Holly and Adam, each with their ghosts, a search this desperate, this unpredictable and this intimate, will have its share of risks - including opening their hearts one more time.

Review:
When I'm looking for a fun, light hearted romance that is full of humour Jill Shalvis is one of my go to authors because I know that's exactly what she'll deliver. Rescue My Heart is a perfect example of that and I enjoyed every minute of Adam and Holly's story. I'm a huge fan of the Lucky Harbor series but I think I might have to say I'm enjoying this one even more, I think it's the cute animals and their crazy antics that add that little extra something but that wouldn't work without the fantastic characters or super hot romance. Although each of the stories in this series work as a stand alone I'd recommend reading them in order because the characters do appear throughout the entire series.

If you've read the first two books you'll already know that Adam is the brother of the previous heroes Brady and Dell. You'll also know that since returning home from the war he has been suffering from PTSD and he has pretty much closed himself off from the world trying to lose himself in his work and avoid contact with people wherever possible. Adam owns the animal clinic alongside his brothers but he focuses on the Search and Rescue side of the business training S&R dogs and their handlers. He used to be active on S&R calls in the local area but ever since he returned home he suffered with panic attacks and had to take a more inactive role running the command centre. Adam and Holly were a couple when they were teenagers but Adam broke her heart when he left her behind to enlist in the army. When her father goes missing Adam is the last person she wants to ask for help but at the same time he is the only one she trusts to help her find him. Spending time together brings back all the old feelings that they used to have for each other and the chemistry between them is hotter than ever but can Adam get past his fear of relationships or will he break Holly's heart for a second time?

I absolutely loved seeing Adam and Holly spend time together, they are so hot for each other from the very first moment but there is a lot of history between them which makes it hard for Holly to trust him again. They're constantly verbally sparring and bantering with each other and although they've both changed a lot since they were dating they still have that connection that's only really there with someone you've known for a very long time. I loved that Adam doesn't judge Holly for the mistakes she's made and is proud of her for the way she has handled her problems and I loved that Holly sees Adam for the incredibly strong man that he is and refuses to let him walk away from her a second time. They both realise that they have changed in the years that they've been apart but they like what they see in each other now and they fit together even better than they did before.

Rescue My Heart has some truly funny moments, it will melt your heart, make you swoon and have you fanning yourself after the fantastic sex scenes! It was great to catch up with the previous couples and I laughed a lot at Adam's brothers and the way they were constantly trying to get the gossip about him and Holly. I also really enjoyed the glimpses we got to see of the couple from the next book, Rumour Has It. I have a feeling I'm going to love Holly's brother Griffin and her best friend Kate!